Scaramucci, who deleted several tweets which supported LGBTQ rights shortly after becoming Trump’s White House Communications Director, also follows more than 167,000 other people on Twitter, including myself (@andytowle) and Towleroad (@tlrd). You should too if you’re not already! 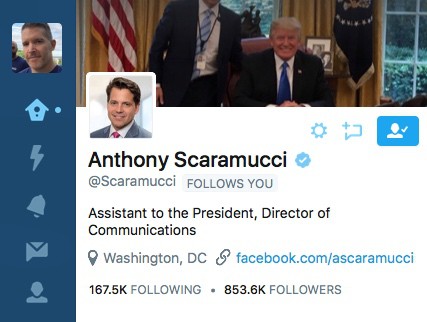 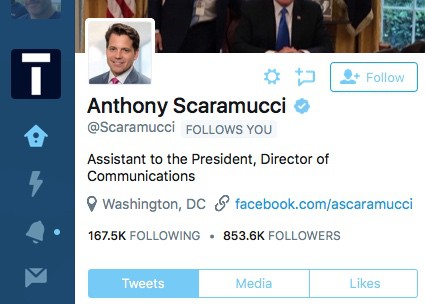 It’s not so odd that Scaramucci follows many people on Twitter. However, most people who follow as many people as Scaramucci does, follow people back once they themselves are followed.

I discovered that Scaramucci was following me as well as Towleroad before we had followed him.

“I posted the screenshot that showed that he was following me,” Mitchell, who identifies as bi-sexual, told The Los Angeles Blade. “He was in a Twitter ‘Moments’ slideshow, and I clicked on his profile inside that. When I saw he was following me, my reaction was exactly what I posted online — Wait…what?”

“I vote every chance I get, and I’m not afraid to ‘get political,’” Mitchell told The Los Angeles Blade. “But I’m at a point in my career where focusing more energy on the current political situation would detract from my abilities to climb the corporate ladder if you will.”

He says he’s been surprised before to find other VIP fans and followers, but “I’d have to say, Anthony Scaramucci is the most surprising follower I have.”