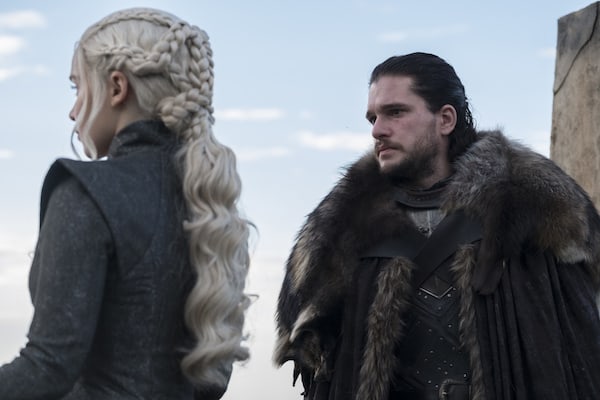 Well, that was a little disappointing, no? For a meeting that was years in the making, getting Jon Snow and Daenerys in a room felt ultimately like a bit of a letdown on last night’s Game of Thrones. (Sort of like when Hillary and Elizabeth Warren had that meeting before she announced her running mate.)

The brewing battle between Cersei and Daenerys continues to simmer with each strategic move. For now, the Mother of Dragons isn’t exactly racking up many Ws, but that seems poised to changed sooner rather than later.

Tonight was all about the “Queen’s Justice,” and on this show, that includes a lethal set of NYX cosmetics.

Let’s break down what went down in our recap below.

At long last, Jon Snow arrives at Dragonstone with thost sexy saltwater-swept locks. He and Davos arrive from their long voyage and are confronted by the steps to the castle that no one ever seems to comment on. I mean, if I just had to sail the sea with someone called The Onion Knight, I’d want to have a lie down before I start an all-out hike. Then again, I’m a softie who’s never fought a White Walker or burned a bunch of Khals alive or shot my own father with a crossbow, so maybe this just isn’t a big deal.

Plus, their load is a bit lighter when Missandei has the men of the North turn over their weapons before taking an audience with Daenerys. And don’t mind the dragons doing a fly-by. Let’s go!

In the throne room, Missandei rattles off Daenerys’ many titles and achievements before Ser Davos stammers an intro for Jon Snow. Dany lays out her case that the Starks had plead fealty to the Targaryens, so let’s just speed this along and have you bend the knee, thanks.

Jon is quick to remind Khaleesi that 1. His family turned on the Targaryens because her dad was crazypants, and 2. He’s not really a Stark, so he’s not beholden to their oaths. And anyway, none of this matters, because if they don’t stop the Army of the Dead, there will be no Seven Kingdoms to rule.

Dany is all, hold up, an army of the what now?

Their conversation is the crux of this season: Should we be focused on stopping the insane woman on the Iron Throne or the evil leader of the undead army? Both feel pretty urgent, to be honest.

For now, Dany is more concerned with securing Snow’s support for her claim to the throne, without which she will consider the North in open rebellion. Even though he’s not super invested in the Iron Throne right now, Jon’s wary about throwing his vote behind the daughter of the guy who roasted a bunch of people. Until Jon makes up his mind, he’ll have to have a little timeout in his room. He’s not a prisoner, per se, but they have seized his boat and weapons.

That’s when Tyrion does what he does best: Politicking. He explains to Jon that Dany would essentially be a fool for believing some total stranger about what sounds like the premise of a very, very bad dark Disney reboot. He encourages Snow to start with a smaller ask, so Jon asks for the dragonglass.

Armed with this information, Tyrion gets Daenerys to agree to let Snow mine the dragonglass, because if he’s wrong, it’s worthless anyway, so who cares?

She may not be convinced of the threat, but she tells Jon he can mine all the dragonglass he wishes to forge into weapons, and she’ll supply whatever resources he needs.

Tyrion is a great negotiator, but his battle strategy is lacking. (More on that later.)

Upon Jon’s arrival Varys catches Melisandre observing Snow’s arrival. She’s on her way out of Westeros, but she’ll be back. “I have to die in this strange country, just like you,” she tells him before making a hasty exit. 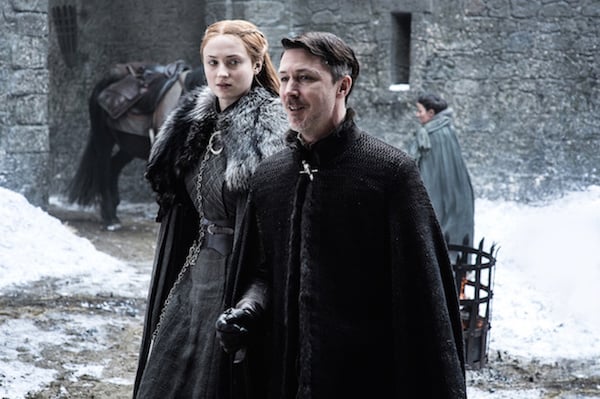 Sansa is doing a pretty good job running things. She’s planning to store enough food to feed all the houses in the North through the longest winter if they’re all driven to Winterfell. She’s making sure the armor is coated in leather to keep the men warm. Littlefinger, of course, is always hovering around, waiting for his chance to swoop in, but this Sansa is no slouch. He tries to mansplain how to rule a kingdom once again:

He tries to give her a little advice. She needs to …

“everyone is your enemy”

“everyone is your friend.”

Before Sansa can really soak it all in, there’s someone at the gates. It’s Bran! Finally returning to Winterfell! Now, history (and the patriarchy) dictate that he is now the proper Lord of Winterfell, technically. However, he’s not really suited to being a Lord now that he’s a three-eyed raven.

“A three-eyed what now?” Sansa wonders.

Out in the Weirwood Bran explains that he basically can see everything that ever happened all at once, including how she got married and all the awful stuff that happened to her with Ramsay. He probably should have prefaced that last bit with a trigger warning, because upon hearing it, Sansa abruptly gets up, shouts RECLAIMING MY TIME and heads back inside.

Meanwhile, at the Citadel …

Jorah is cured! Hooray! Although he tries to tell the archmaester his miraculous recovery can be attributed to rest, the climate, healing crystals, hopes and prayers, etc., the archmaester knows this is Sam’s doing.

Although Tarly should be punished for deliberately disobeying his orders, he did save a man’s life, so he gets to stay and keep doing the intern work he was doing all along while Jorah sets out to reunite with Daenerys and probably end up dead anyway. 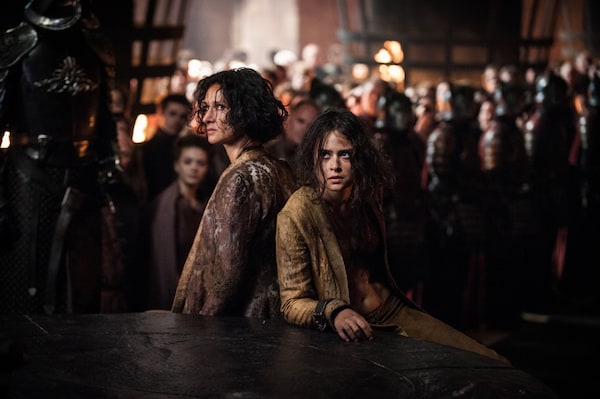 Euron is back with quite the gifts for Cersei. He parades a captive Yara, Ellaria and her daughter Tyene through the streets as the merry citizens of King’s Landing hurl trash and insults at the prisoners. What a terrific citizenry, a real basket of deplorables, those folks.

Euron delivers Ellaria and Tyene to Cersei and taunts Jaime a bit about boinking his sister. Euron will not survive this season, and my money’s on Jaime to kill him. As a reward, Cersei promises to marry Euron once the war is over.

With Ellaria and Tyene chained and gagged in the dungeon, Cersei delivers one of those long, flowery villain speeches about vengeance and her plotting and all that. She’s fantasized about how to get revenge on Ellaria for killing Cersei’s daughter, and she’s come up with quite the poetic justice. She kisses Tyene with the same poison in her lipstick that Ellaria used. Now, she will make Ellaria not only watch her daughter die, but also to rot in front of her, unable to touch or comfort her. Yikes.

All this comeuppance has got Cersei hot and bothered, so she pays a visit to Jaime for a little brother-sister sexytimes (ew, sorry, even with Jaime). When a servant girl knocks the next morning, Queen Cersei DGAF and lets her see exactly with whom she’s sleeping. She even requests fresh sheets.

The Iron Bank also comes a calling for all those debts the Lannisters are so famous for repaying. Given the general state of chaos surrounding the Iron Throne, now seems like a good time to collect. Cersei isn’t worried, and with good reason. 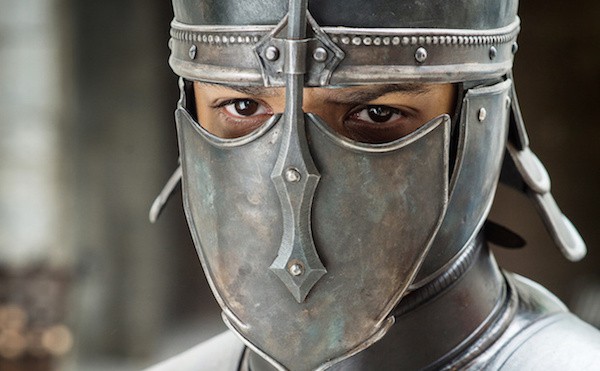 Tyrion, it would seem, had the perfect plan to take the Lannister home. He had a secret passage into the impregnable gates that he used to sneak in prostitutes back in his more rakish days. It’s the perfect way in for the Unsullied to take Casterly Rock for themselves, which they do, with ease. Almost too much ease.

Turns out, the Lannister army is significantly less than the 10,000 they were expecting. The Unsullied may have taken Casterly Rock, but while they were busy storming, Euron’s fleet destroyed their ships, essentially deserting them there without supplies.

And where are the rest of those troops? 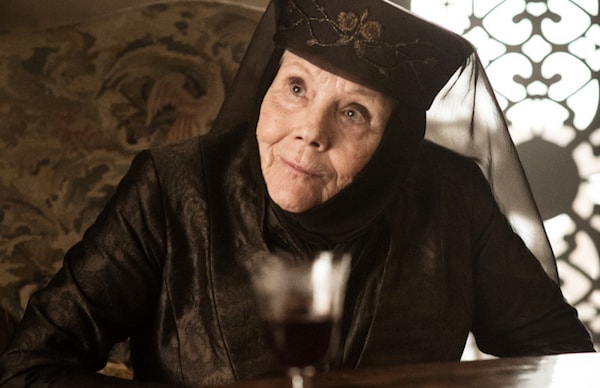 She warns him that Cersei is a monster, and he will regret helping her. She asks how he plans on killing her, and, class act that he his, he offers her a painless poison, which she knocks back like so many fratboys doing Jaegerbombs. Before she shuffles off this mortal coil, she’s got one more epic burn for the Lannisters. She tells him that she was the one that killed Joffrey and she wants to be absolutely sure Cersei knows it.

So, Jaime takes the Tyrell gold to repay the Iron Bank and defeats another one of Daenerys’ allies, seemingly evening up the odds in this war. This leaves Dany with an Unsullied army stranded at Casterly Rock, a Dothraki hoard that’s frightened of traveling by sea and three maybe-not-so-indestructible dragons.

Despite the long-awaited (but ultimately a little disappointing) meeting of Jon and Daenerys and the loss of fan-favorite Lady Olenna, this felt like a bit more of a transitional episode. (Or maybe I’m just spoiled by seeing the Freys all poisoned and a big, fiery pirate battle.) A massive confrontation is on the horizon, and these early victories for Cersei feel a bit like the pride that cometh before the fall, no?

Here’s my nearly totally baseless theory of the week: That cute servant girl that spied Cersei and Jaime canoodling is none other than Arya Stark, having abandoned her quest North after her meeting with Nymeria. Will she be the one to kill Cersei, and will she wear Jaime’s face when she does it?

Previous Post: « A Closeted Boy is Outed by His Own Heart ‘In a Heartbeat’ — WATCH
Next Post: Anthony Scaramucci Out as White House Communications Director »