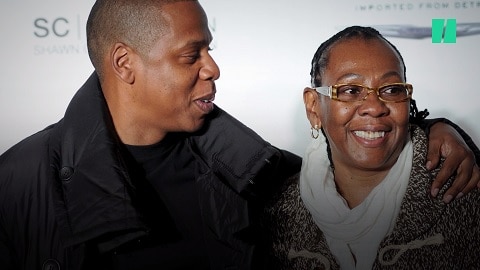 Jay-Z’s mom Gloria Carter comes out as a lesbian on a track on the just-released album 4:44.

While some of the lyrics on “Smile” are a touch cringe (“Mama had four kids, but she’s a lesbian / Had to pretend so long that she’s a thespian”) the song delves into Carter’s issues with mental health while Jay-Z clearly couldn’t be happier for Carter.

“Had to hide in the closet, so she medicate. Society shame and the pain was too much to take.

“Cried tears of joy when you fell in love. Don’t matter to me if it’s a him or her.”

Carter pops up on the track to deliver a spoken work section:

“Living in the shadow, can you imagine what kind of life it is to live?

“In the shadows people see you as happy and free because that’s what you want them to see. “The world is changing and they say it’s time to be free, but you live with the fear of just being me.

“Living in the shadow feels like the safe place to be.

“No harm for them, no harm for me but life is short, and it’s time to be free.

“Love who you love, because life isn’t guaranteed.”

According to Huffington Post, in 2012 Jay-Z voiced support for same-sex marriage, saying “what people do in their own homes is their business and you can choose to love whoever you love. That’s their business. [It] is no different than discriminating against blacks. It’s discrimination plain and simple.”

Previous Post: « PHOTOS: Chris Christie, Family Soak up Sun on N.J. Beach he Closed to Public
Next Post: Your Sexuality Could Affect Your Rent, Study Finds »