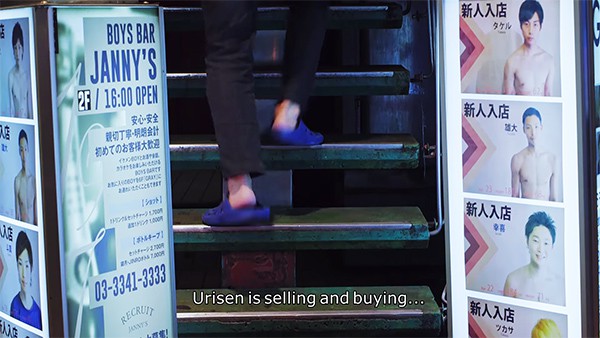 Boys for Sale is a new documentary that explores the phenomenon of the urisen, or male brothel, in Tokyo, in which male sex workers, also called urisen, often identify as straight yet make themselves available to an all-male clientele for cash.

Directed by Itako in his first effort, the 76-minute film made its North American screen debut at Outfest in Los Angeles earlier this month.

Itako sat down with several of the sex workers to gather impressions of their world. British magazine Gay Times explains:

Itako visits famous gay district Shinjuku 2 Chome to sit down with several male prostitutes – or “urisen” – ranging from 19 to 30 years old, who discuss the ins and outs of their job in engrossing detail.

The sexually explicit experiences are presented as illustrations in a bid to represent all aspects of their lives on screen. Some of the boys choose to hide their identity by donning masks to hide their faces, while others just don’t care.

A large majority of the boys feature claim to be straight, and some of them have girlfriends. When asked how they’re able to sleep with men who they aren’t attracted to, one of the boys answered: “I’m detached. My mind goes blank.”

The boys share how they got into the business of selling their bodies, with some explaining that they hadn’t been dating at that time and they needed money. Many of them were homeless following being orphaned by natural disasters.

It also touches on broader issues such as the country’s hypocrisy when it comes to sex, and the spread of the HIV virus, which is not acknowledged by the government.

Itako also offers this vignette on the film’s official website:

I followed my subject, a transgender woman, into a dark bar hidden away on the second floor of a building in 2-chome.  “For only having a few seats, there are an awful lot of bartenders here,” I thought, glancing at the 10 or so young guys behind the bar.  Opening what I thought was a drink menu, inside were photos of the young guys, together with fact sheets detailing their ages (18-24), hobbies, body measurements and sexuality (mostly straight).  Next to this was a list of sexual acts each was willing to do with men and a price list.