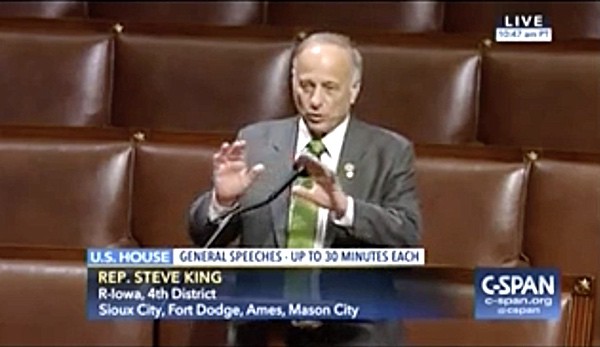 Bigoted and homophobic Iowa Rep. Steve King spoke out on the House floor this week about the defeat of a measure that would have prohibited the Army from paying for gender transition surgery for transgender troops.

King compared the situation to that of the Ottoman Empire:

“What they did in order to keep them from reproducing was that they did reassignment surgery on those slaves they had captured, that they had put into their janissary troops. And that reassignment surgery was they took them from being a virile, reproductive male into being a eunuch. That’s a lesson of the military — the Ottoman military — from two, three, 400 years ago…And today, we’re here thinking somehow we’re going to make the military better by letting people line up at their recruitment center who have planned that they want to do sexual reassignment surgery, know that it’s expensive, and believe ‘if I can just get into any branch of the United States services — to the Army, the Navy, the Air Force, the Marines; maybe become a Navy SEAL — and then submit to sexual reassignment surgery and then go from a man to a woman.'”

Previous Post: « ‘Star Wars: The Last Jedi’ Clip Offers a Juicy Tease of the Much-Anticipated Eighth Movie: WATCH
Next Post: If You Read ‘A Wrinkle in Time’ as a Kid, You Need to See This New Trailer: WATCH »