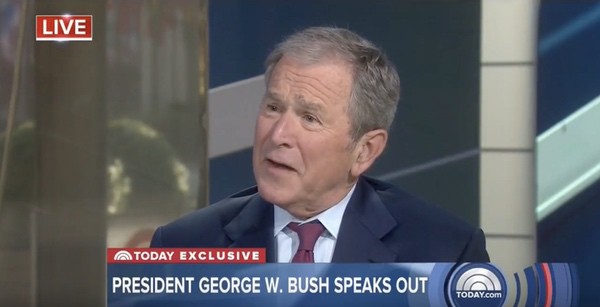 Former Presidents George H.W. Bush and George W. Bush released a joint statement on Wednesday in response to the neo-Nazi and white supremacist rally in Charlottesville.

“America must always reject racial bigotry, anti-Semitism, and hatred in all forms. As we pray for Charlottesville, we are reminded of the fundamental truths recorded by that city’s most prominent citizen in the Declaration of Independence: we are all created equal and endowed by our Creator with unalienable rights. We know these truths to be everlasting because we have seen the decency and greatness of our country.”

Calls for the five living presidents – the Bushes, Carter, Clinton, and Obama – to release a joint statement spread on social media shortly after the weekend’s hate rally.

All 5 living Presidents should release a joint statement about the country’s unequivocal opposition to Nazism. Immediately #charlottesville

Donald Trump on Tuesday called those behind the violent white supremacist rally “fine people” on Tuesday.

Previous Post: « Go Behind the Scenes with Charli XCX and the Celebrity Boys in Her ‘Boys’ Video: WATCH
Next Post: Clay Aiken Apologizes for Ever Defending ‘Actual Racist’ Donald Trump: ‘I am a F—ing Dumbass’ »