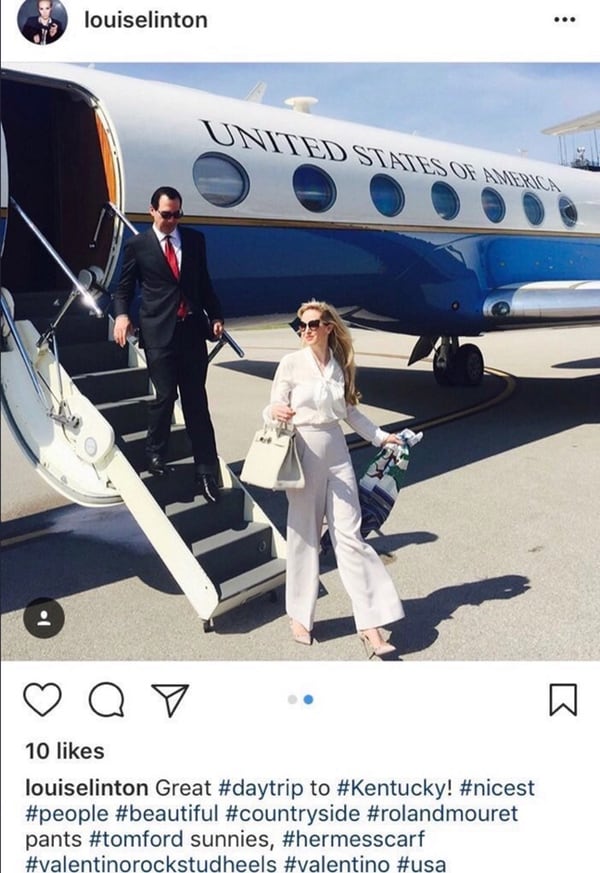 Following this week’s disgusting Instagram post by classhole Louise Linton, the wife of Treasury Secretary Steven Mnuchin, who boasted about her wealth and touted her fashions, tagging each one before belittling a commenter who had the audacity to comment on how inappropriate she was, a govt. watchdog is looking into the Mnuchin’s use of a government plane for their ‘daytrip’ to Kentucky.

Citizens for Responsibility and Ethics in Washington (CREW) is seeking copies of all records concerning authorization for and the costs of Mnuchin’s use of a government plane to travel to Lexington, Kentucky on Monday, August 21″ and for any purpose since his appointment as Treasury Secretary.

Writes CREW: “The requested records would shed light on the justification for Secretary Mnuchin’s use of a government plane, rather than a commercial flight, for a trip that seems to have been planned around the solar eclipse and to enable the Secretary to secure a viewpoint in the path of the eclipse’s totality. At a time of expected deep cuts to the federal budget, the taxpayers have a significant interest in learning the extent to which Secretary Mnuchin has used government planes for travel in lieu of commercial planes, and the justification for that use.”

Said Linton, who has played Marie “Let Them Eat Cake” Antoinette on television, through a publicist: “I apologize for my post on social media yesterday as well as my response. It was inappropriate and highly insensitive.”

An official with the Treasury Department also put out a statement that the government had been reimbursed for Linton’s “day trip” to Kentucky, one of the poorest states in the nation.

And Linton’s attempt to be some sort of influencer backfired handily, with brands distancing themselves from the classless climber.

A spokeswoman said plainly that “Louise Linton did not receive any gifted merchandise, compensation or loans from Valentino” when asked whether the company had any formal business interest in being tagged in a late Monday post by Linton.

The actress, whose most high-profile role to date is a 2007 appearance on “CSI: NY,” is also not affiliated in any way with and has received no free merchandise from Tom Ford, a brand she also mentioned in her post.

The one thing Linton did succeed at was to establish herself as a classless icon for the out-of-touch Trump administration, populated with officials who see it as a branding opportunity, who claim to be making a personal sacrifice from their individual wealth-accumulating endeavors.