Donald Trump on Thursday launched fresh attacks on Senator Mitch McConnell and House Speaker Paul Ryan, blaming them for another of his failures. Also, Obama and the “fake news” media.

“I requested that Mitch M & Paul R tie the Debt Ceiling legislation into the popular V.A. Bill (which just passed) for easy approval. They……didn’t do it so now we have a big deal with Dems holding them up (as usual) on Debt Ceiling approval. Could have been so easy-now a mess!”

Trump also retweeted an image of the worst eclipse ever which was titled, Best Eclipse Ever (a slap at Obama). 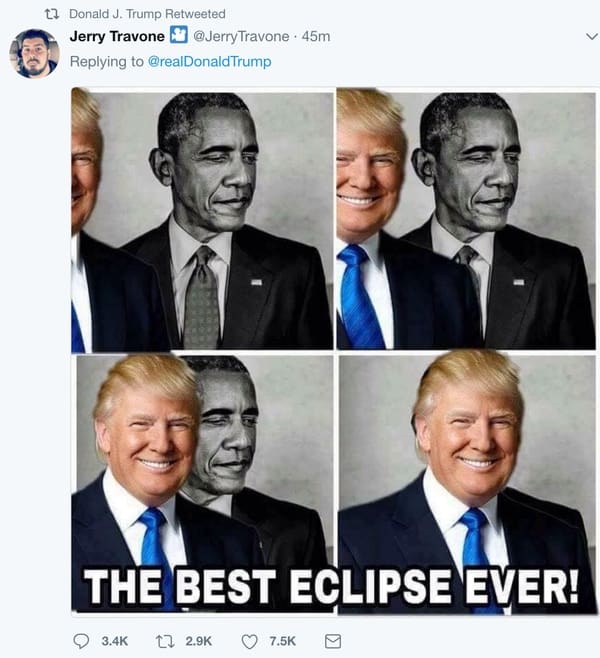 And attacked the”fake news” once again: “The Fake News is now complaining about my different types of back to back speeches. Well, their was Afghanistan (somber), the big Rally……..(enthusiastic, dynamic and fun) and the American Legion – V.A. (respectful and strong).To bad the Dems have no one who can change tones!”

Previous Post: « Watchdog Group Requests Docs on Steven Mnuchin and Louise Linton’s Use of Government Plane for Eclipse ‘Daytrip’
Next Post: Manchester Thief Who Targeted Gay Men Before Choking Them Unconscious and Robbing Them is Jailed for 8 Years »