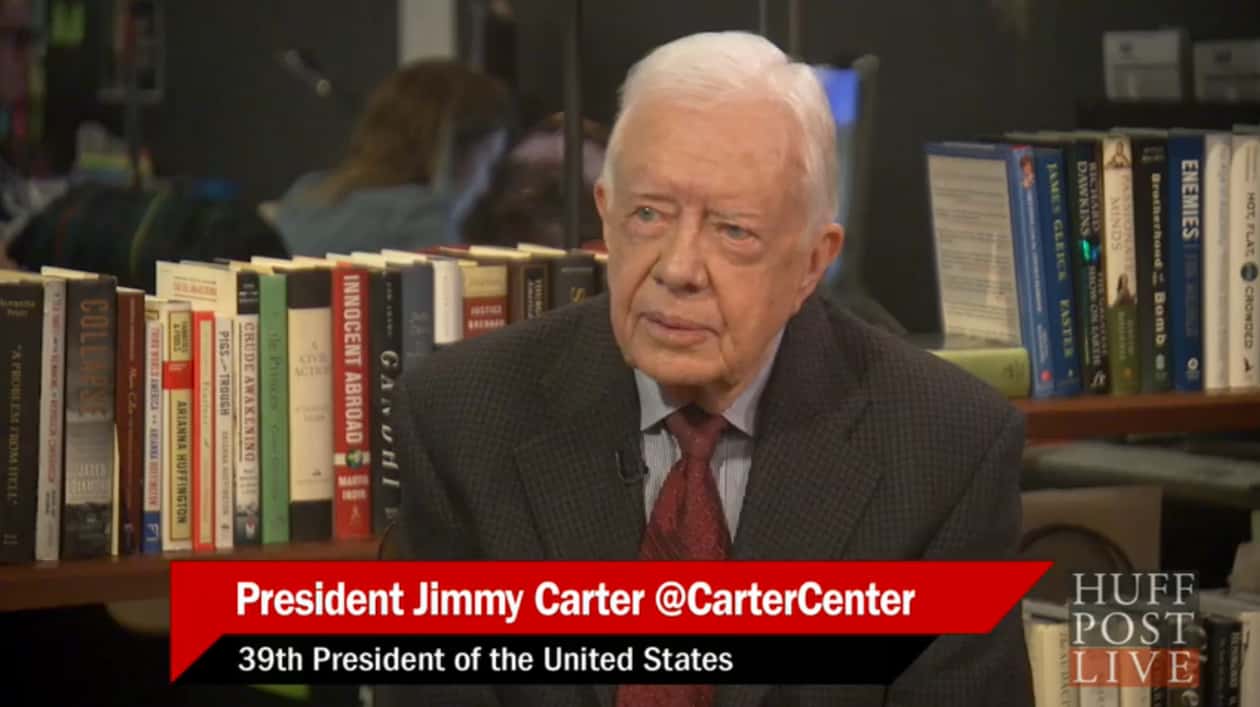 Former President Jimmy Carter released a statement on the situation in North Korea, saying they’re ready to destroy Seoul and emphasizing that “a commitment to peace by the United States and North Korea is crucial.”

The harsh rhetoric from Washington and Pyongyang during recent months has exacerbated an already confrontational relationship between our countries, and has probably eliminated any chance of good faith peace talks between the United States and North Korea. In addition to restraining the warlike rhetoric, our leaders need to encourage talks between North Korea and other countries, especially China and Russia. The recent UN Security Council unanimous vote for new sanctions suggests that these countries could help.  In all cases, a nuclear exchange must be avoided. All parties must assure North Koreans they we will forego any military action against them if North Korea remains peaceful.

I have visited North Korea three times, and have spent more than 20 hours in discussions with their political leaders regarding important issues that affect U.S.-DPRK relations.

In June 1994, I met with Kim Il Sung in a time of crisis, when he agreed to put all their nuclear programs under strict supervision of the International Atomic Energy Agency and to seek mutual agreement with the United States on a permanent peace treaty, to have summit talks with the president of South Korea, to expedite the recovery of the remains of American service personnel buried in his country, and to take other steps to ease tension on the peninsula. Kim Il Sung died shortly after my visit, and his successor, Kim Jong Il, notified me and leaders in Washington that he would honor the promises made by his father. These obligations were later confirmed officially in negotiations in Geneva by Robert Gallucci and other representatives of the Clinton administration.

I returned to Pyongyang in August 2010, at the invitation of North Korean leaders, to bring home Aijalon Gomes, an American who had been detained there. My last visit to North Korea was in May 2011 when I led a delegation of Elders (former presidents of Ireland and Finland and former prime minister of Norway) to assure the delivery of donated food directly to needy people.

During all these visits, the North Koreans emphasized that they wanted peaceful relations with the United States and their neighbors, but were convinced that we planned a preemptive military strike against their country. They wanted a peace treaty (especially with America) to replace the ceasefire agreement that had existed since the end of the Korean War in 1953, and to end the economic sanctions that had been very damaging to them during that long interim period. They have made it clear to me and others that their first priority is to assure that their military capability is capable of destroying a large part of Seoul and of responding strongly in other ways to any American attack. The influence of China in Pyongyang seems to be greatly reduced since Kim Jong Un became the North Korean leader in December 2011.

Previous Post: « Gay Man Stripped Naked and Forced to Explain His Vote for Trump: WATCH
Next Post: Bill Hader is SNL’s Anthony Scaramucci, and He FaceTimed in to ‘Weekend Update’ – WATCH »