Joan Castleman (Glenn Close) is a long-suffering wife who would bristle at that very description. She’s married to a famous novelist Joe Castleman (Jonathan Pryce) and their homophonic names are no coincidence. The silver-haired couple have been together for nearly half a century and are inseparable if not quite interchangeable.

As THE WIFE begins we learn that Joe has just been named the Nobel prize winner in literature and the couple are to travel to Stockholm together for the ceremony. They’re so happy they actually jump on their bed in a singularly charming scene. This slow burn starts out playful but it deepens as it goes thanks to Close’s brilliant star turn…

When the cracks in the happy marriage facade begin to show you see what Björn Runge, a Swedish director making his first English language film, and Glenn Close are up to in their concise adaptation of Meg Wolitzer’s bestseller.

All the principle characters in Joe’s orbit also happen to be writers and resent him, if not quite his enormous success, for different reasons: his son David (Max Irons) never gets the encouragement he needs, his wife Joan was a promising writer who set her own career aside when she married him, and then there’s Nathaniel (Christian Slater) who’s been trailing the family for years trying to get permission to write Joe’s biography.

The interpersonal dynamics and face-offs are the savory meat of the film. To my personal astonishment Glenn Close restricts herself to chewing on it rather than the scenery! Put simply it’s the best work she’s done in over 20 years. 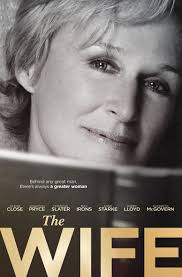 Close’s opacity as an actress, the unknowability of that glacial face, has often been disguised by her sheer volume and ferocity in so many gorgon roles. Here in Joan’s quieter less sinister register, she’s spectacular. You constantly attempt to figure Joan out but Joan will not have it. She prefers to remain a mystery, hiding her true feelings from everyone, including possibly herself. Her mercurial moods will shift within scenes — just when you expect her to double down on anger she’ll throw compassion at you, and vice versa keeping you off balance. At one point in a brilliantly acted private ‘date’ with that would-be biographer, she says “I’m shy” with something like mock flirtation. It sounds like a lie, but it’s actually the truth of this mesmerizing character.

The film isn’t quite as coy as Close, eventually revealing its hand. Joan Castleman and her poker face would not approve. But that, in a nutshell, is the satisfying friction of the film, a star vehicle wherein the star keeps threatening to jump from her own limo.

The Wife currently has no firm release date but if it wins distribution by the end of the year, expect a Best Actress campaign for Glenn Close.