KELLYANNE CONWAY. America doesn’t want to listen to politicized awards shows: “Between the Emmys, the Miss America pageant was very politicized, our sports are very politicized, and it looks like the ratings are suffering. It looks like America is responding by tuning out because they want you to stick to your knitting.” 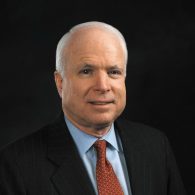 TRANS MILITARY BAN. McCain joins fight to block Trump’s trans military ban: “When less than one percent of Americans are volunteering to join the military, we should welcome all those who are willing and able to serve our country. Any member of the military who meets the medical and readiness standards should be allowed to serve — including those who are transgender.”

DAMN IT. Jackie Hoffman did not hold back when she lost to Laura Dern at the Emmys, and people thought she was serious.

RUSSIA PROBE. Trump lawyers clash on how much to cooperate: “The debate in Mr. Trump’s West Wing has pitted Donald F. McGahn II, the White House counsel, against Ty Cobb, a lawyer brought in to manage the response to the investigation. Mr. Cobb has argued for turning over as many of the emails and documents requested by the special counsel as possible in hopes of quickly ending the investigation — or at least its focus on Mr. Trump.

ROLLING STONE. The magazine is for sale.

TEXAS. Mayor asks SCOTUS to review ruling on same-sex marriage rights: ‘The City of Houston and Mayor Sylvester Turner filed a petition Friday asking the U.S. Supreme Court to review a decision that came down earlier this summer, concluding that states did not have to provide publicly funded benefits to same-sex couples, according to a news release from the city.  The decision in Pidgeon v. Parker from the Texas Supreme Court on June 30 said states did not have to provide government employee benefits to all married persons, regardless of whether their marriages are same sex or opposite sex.”‘

SMART SPEAKERS. Sonos is going to make a speaker with Alexa built in.

CUBA. State Department may close embassy after acoustic attacks: “We have it under evaluation. It’s a very serious issue with respect to the harm that certain individuals have suffered,” Tillerson told CBS’s “Face the Nation.”

Previous Post: « Dianne Feinstein Rips Trump for Hillary Golf Ball Tweet: ‘Appalling and Disgusting…Grow Up and Do Your Job’
Next Post: Smokers with HIV Far More Likely to Die of Lung Cancer »