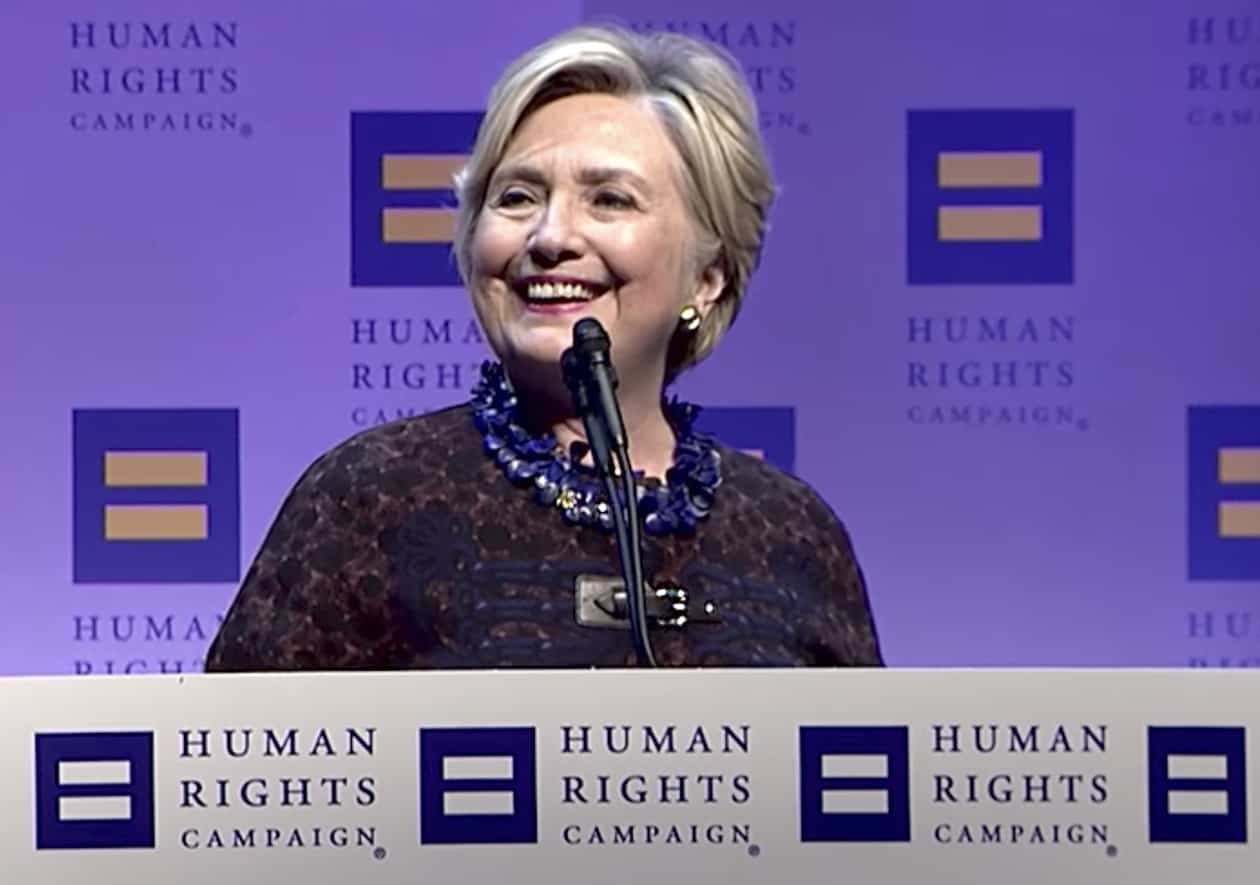 Hillary Clinton was the keynote speaker at the Human Rights Campaign’s national dinner in Washington D.C. last night and took Donald Trump to task over his administration’s attacks on LGBTQ people. She also tore into FOX News and Alabama Senate candidate Roy Moore.

Clinton took aim at the White House’s efforts to roll back the Affordable Care Act and ban transgender service members, as well as its silence on international LGBT issues, during her remarks at the national dinner of the Human Rights Campaign, an LGBT rights organization.

…”You know and [Trump] knows that transgender people have fought and died for this country,” Clinton said, adding that it was “insulting and wrong” for his administration to suggest transgender troops are unfit to serve.

Trump’s Justice Department has also argued in court that LGBT people are not protected from discrimination under the Civil Rights Act of 1964, reversing a legal position trumpeted by the Obama administration. It also voted against a United Nations resolution that condemned use of the death penalty against those who engage in consensual same-sex relationships.

“We cannot rely on this administration or the Supreme Court to uphold LGBT rights,” Clinton said. “We need to be agitating to pass the Equality Act,” she added, referring to proposed legislation that would make housing and workplace discrimination based on sexual orientation and gender identity illegal.

After quipping that she would have preferred to be living closer to this year’s HRC dinner, Clinton said, “It does strike me that in the last few days that at least Fox News seems to think that’s where I live, in the White House, because they spend a disproportionate amount of time talking about impeaching me. So look, if they want to make a trade, I’d be more than willing.”

Her comments drew big cheers from the crowd of about 3,600 people. HRC is the largest LGBTQ rights organization in the country.

Clinton also warned of the Trump administration’s agenda, as well as of the Senate candidacy of Roy Moore in Alabama.

“When the Republican Senate candidate in Alabama supports the idea that homosexuality should be criminalized, and refuses to say whether or not he thinks that LGBT people should be executed, Americans of every party, of any decency, Democrats. Republicans and independent should …condemn him and those views,” she said. “And that includes the President, the Senate majority leader, the Speaker of the House and every single elected official who endorses a candidate with those views should be held accountable.”

Previous Post: « Colton Haynes and Jeff Leatham Married in Palm Springs
Next Post: Kevin Spacey Makes Offensive Decision to Come Out After Being Accused of Sexually Abusing a Teen »