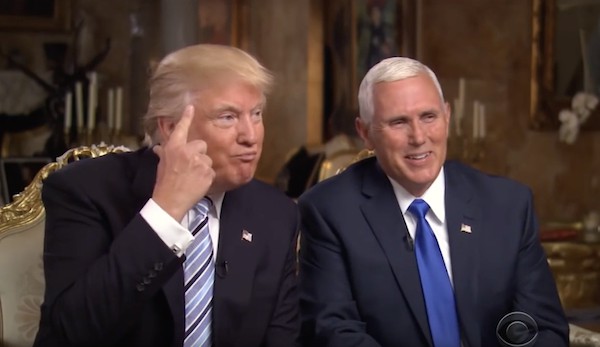 The New Yorker’s Jane Mayer just published an article about the risks America might face if Trump were impeached and Mike Pence became president, which features this eye-opening paragraph:

“Trump thinks Pence is great,” Bannon told me. But, according to a longtime associate, Trump also likes to “let Pence know who’s boss.” A staff member from Trump’s campaign recalls him mocking Pence’s religiosity. He said that, when people met with Trump after stopping by Pence’s office, Trump would ask them, “Did Mike make you pray?” Two sources also recalled Trump needling Pence about his views on abortion and homosexuality. During a meeting with a legal scholar, Trump belittled Pence’s determination to overturn Roe v. Wade. The legal scholar had said that, if the Supreme Court did so, many states would likely legalize abortion on their own. “You see?” Trump asked Pence. “You’ve wasted all this time and energy on it, and it’s not going to end abortion anyway.” When the conversation turned to gay rights, Trump motioned toward Pence and joked, “Don’t ask that guy—he wants to hang them all!”