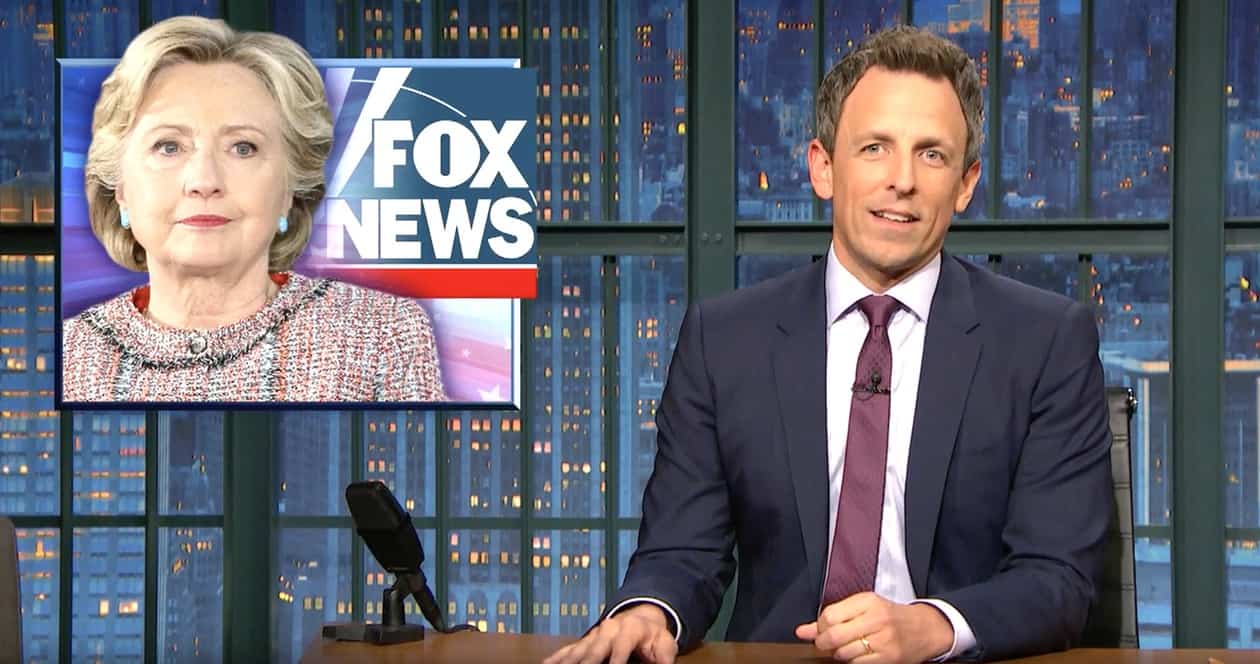 Seth Meyers put FOX News in his crosshairs last night, mocking the anchors who inflate Trump’s ego while they obsess over Hillary Clinton.

Meyers started by looking at Trump crowing about “one of the great memories of all time” by pointing to his own head when he explained to reporters that his account of the phone call to fallen soldier Lt. La David Johnson’s widow was the right one.

Said Meyers: “His memory is so great he has to point to his head to show us where it is.”

By the way, Meyers added, speaking directly to Trump, “you do not have a great memory,” pointing out the “dance mom” FOX News hosts that have to correct him when he mistakes Syria for Iraq, or some other such flub.

Trump also this week took the opportunity to use his condolence calls to Gold Star families to show how great he is, and explained to the press that he’s “a very intelligent person.”

“Are you?” asked Meyers. “Because you talk like a Rosetta Stone video for remedial English.”

But Meyers suggested that Trump’s inflated ego is further blown up by FOX News, the “TV channel dedicated to showering [him] with praise,” seguing to a slobbering Lou Dobbs heaping compliments on Trump.

“Ugh! Usually when you see an old dude slobber that much, he has a nurse with him,” gasped Meyers.

Then Meyers turned to the other alternate reality pushed by FOX News.

“In particular, they’ve tried to dredge up a series of debunked and overblown stories to muddy the water and make it seem like it was actually Hillary who colluded with Russia…”

The faux news channel has been pushing debunked Clinton stories as “the real Russia story” and no anchor has been more obsessed than Sean Hannity, who has also expressed a particular interest in the pee tape details in the Russian dossier.

Concluded Meyers: “Fox News would much rather talk about Hillary than Donald Trump. That’s because the right, in the Trump era, doesn’t have coherent principles or an ideology, it just has enemies. Which is why they prefer to inhabit an alternate reality where Hillary Clinton is president. And what little you will hear about Trump won’t be negative.”

Except for those “hookers urinating in Trump’s bed.”