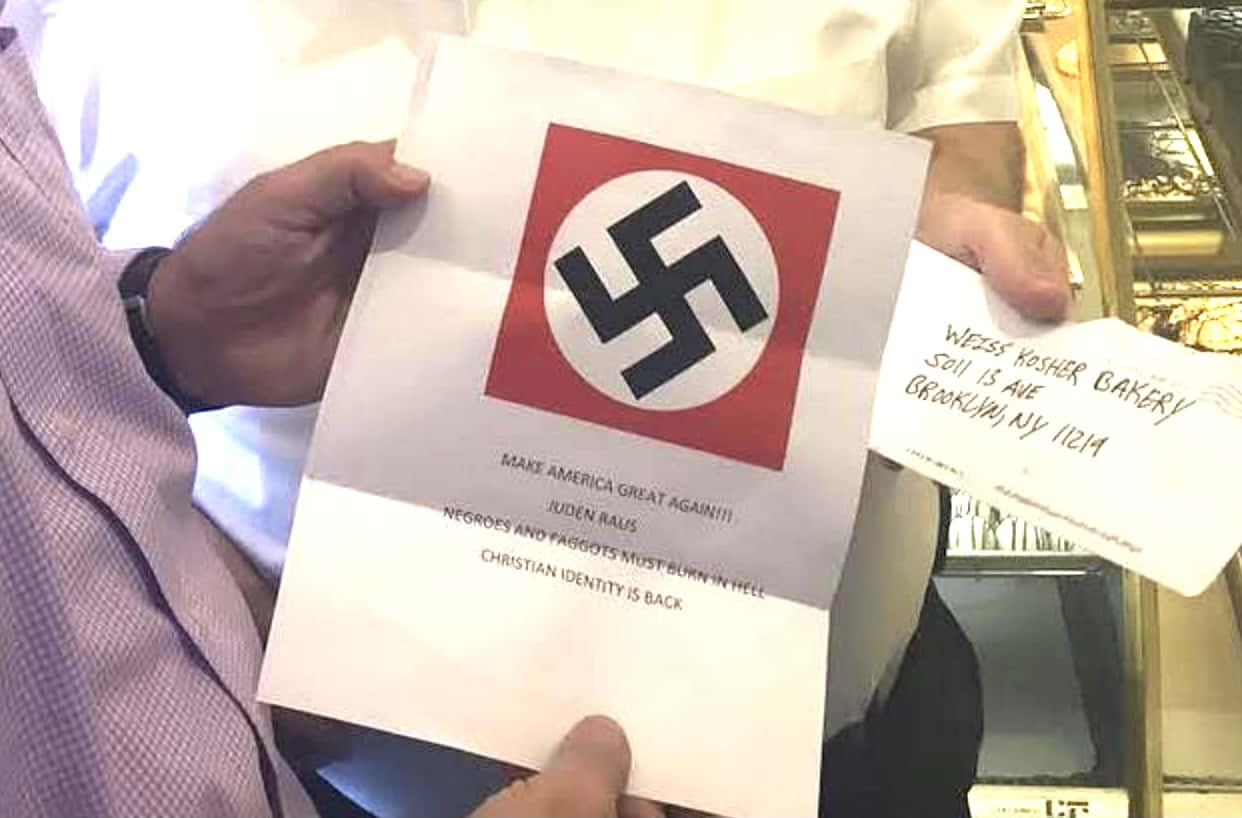 At least seven businesses throughout New York City received a hate letter with a swastika and the Trump slogan “Make America Great Again” which threatens Jews, black people, and gays, and reads “Christian Identity is Back”.

“Juden Raus”, which can be seen on the letter above, is German for “Jews out.”

New York State Assemblyman Dov Hikind posted the letter to Facebook and alerted the police after being told of it by Weiss Bakery in Brooklyn, which received one of the letters.

“In light of what’s going on the world, all threats must be taken very seriously,” said Hikind. “We’re not waiting for an incident before addressing a threat. Fortunately, our community and myself have an excellent relationship with law enforcement—and the NYPD is the best there is at addressing criminal activity.

“Hate crimes are serious matters. This threat against one of our community’s beloved establishments, which used the U.S. mail, is absolutely a hate crime. It’s sad that we live in a time when such disgusting things are said about various races, including the Jews, but we will certainly take these matters seriously when they arise and act swiftly and responsibly, in tandem with the police, to make sure our community members are safe and protected.”

Hikind urges anyone who is threatened to contact their local precinct. He said the NYPD’s 66th precinct is pursuing the threat to Weiss Bakery and the bias unit is involved.

We are aware of this and similar letters that have been sent. We are investigating and will not stand for these acts. https://t.co/DoO2bDQiWQ

The official Israeli Mission to the United Nations on Second Avenue, The Harlem Business Alliance on Lenox Avenue in Manhattan, a law firm on Coney Island Avenue in Sheepshead Bay, Brooklyn, a law office on Voorhies Avenue, also in Sheepshead Bay, a jewelry store on East 116th Street in East Harlem, and a Starbucks coffee shop on West 145th Street in Hamilton Heights all received the letter, according to the NYPD.