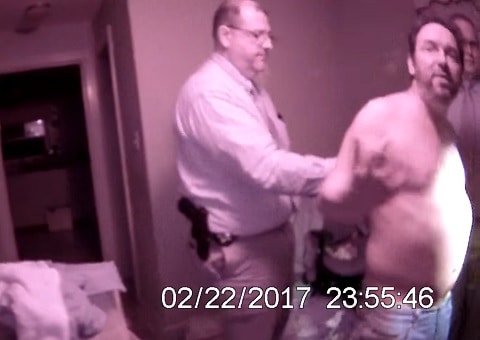 A Kentucky gay couple have claimed they were unfairly targeted and harassed in their home by local law enforcement officers.

Rodriguez said he only had a couple drinks and took Melatonin before going to bed. In Kentucky, an AI charge has to be attributed to a public disturbance. Rodriguez claims he didn’t cause a disturbance before police arrived.

Police later said that Hamilton was arrested for “harassing communications” because he called the Sheriff’s Department too many times inquiring about why police were looking for Rodriguez.

Rodriguez said he woke up later that night to find police at his door.

“I thought ‘oh hey, they’re here for something in the neighborhood and can I help out?’ I came out with the intention to help them-assist them, with whatever they were there for,” Rodriguez said. “I had no idea why they were there to do what happened next.”

This time, they want Hamilton … but again won’t say why. And things go downhill, Rodriguez says, when police try to enter their home.

In a video posted on YouTube by Hamilton, a police officer identified by the couple as Chief Deputy Davant Ramage, begins yelling and banging on the couple’s door.

…Ramage begins to use obscene language, while other officers can be seen laughing.

“I will tell you right now you shit apple redneck, if you raise your voice to me one more time I will throw your ass right off this porch and drag you to jail, now you need to understand that.” The officer said.

The police retrieve a sledgehammer from their car to break down the door. Officers discuss how to enter the home and threaten to shoot the couple’s dog, who Rodriguez warns might attack them. Hamilton  eventually unlocked the door and the officers arrest him. Rodriguez said the officers then taser his husband, which isn’t seen in the video.

Both men were released from jail the following morning. Hamilton said he discovered through official records that police were looking for Rodriguez in relation to an outstanding fine in another county.

The couple said they felt targeted by police the night of their arrests. In the video, police refer to both men as a “doo-dah.”

The Kentucky Fairness Campaign advocates for LGBTQ people Chairperson Chris Hartman said although it’s not surprising to hear about such issues, it’s hard to see in the footage if the officers are discriminating.

Hamilton has a hearing on December 18 for a motion to dismiss for lack of probable cause and unreasonable seizure. If the case is not dismissed, both Rodriguez and Hamilton will go to court in January.

Previous Post: « ‘Will & Grace’ Goes Back in Time for a ‘Gay Olde Christmas’ – SNEAK PEEK
Next Post: San Diego Teen Was Taunted with Anti-Gay Slurs on Social Media Before Killing Himself »