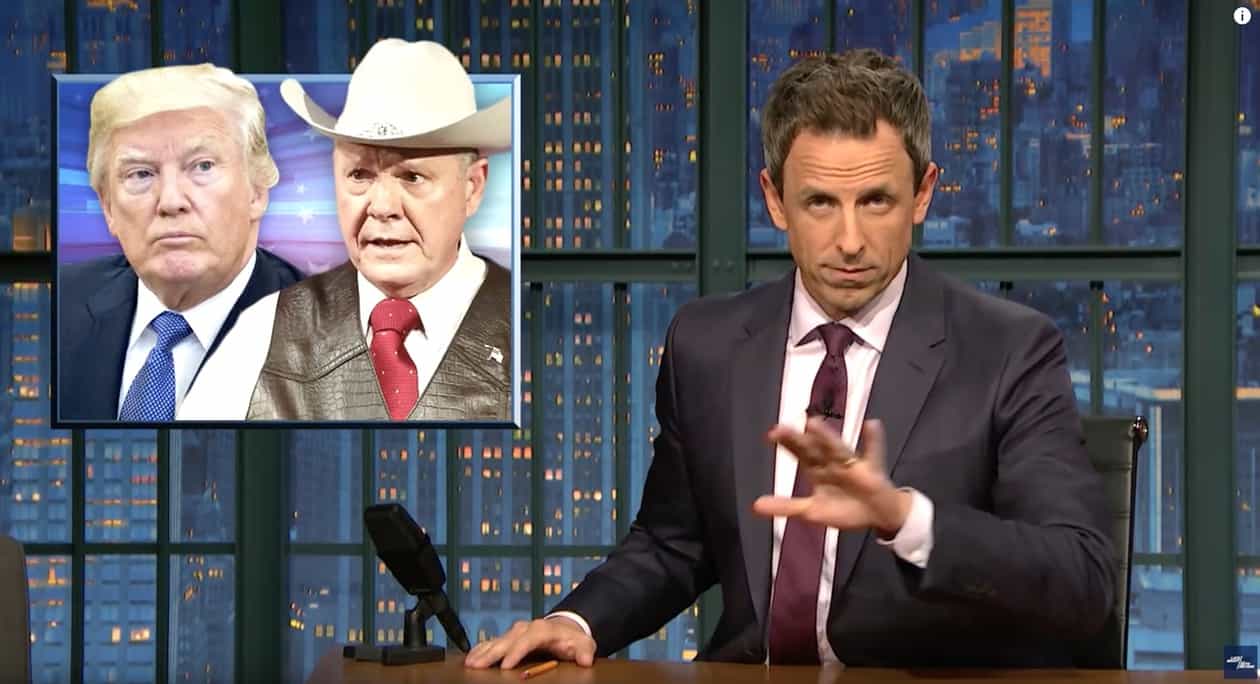 Trump left the White House for Florida and the Thanksgiving weekend yesterday, but he assured America that he’d be working hard over the weekend, telling reporters, “We’re going to be working very hard during the recess in Florida. We’re going to Florida.”

“Only Trump could get ‘We’re going to be working very hard’ and ‘We’re going to Florida’ in the same sentence. Maybe Trump thinks he’s working hard because Twitter went from 140 characters to 280. (In Trump voice…) ‘My workload has doubled. Sometimes I have to type tax cuts and #MAGA in the same tweet.'”

But before Trump left he finally said some words about Roy Moore, defending the Alabama GOP senate candidate against the allegations of sexual assault against him.

“He denied it,” said Trump to the press.

“Today, we found out that the old saying is true; sexual predators of a feather flock together…And in fairness to Trump, who are you going to believe. Nine women who don’t know each other and whose stories have been corroborated by dozens of independent sources or a guy who looks like Marlboro Man’s deadbeat dad?”

“He’s soft on crime?!?” Meyers asked. “You’re siding with an accused child molester over a guy who prosecuted the KKK. You’re so soft, you look like a tub of melted Play-Doh!”

Meyers then turned to Charlie Rose, ripping the CBS This Morning host for parading in front of women in an open bathrobe:

“If your face isn’t pulling in the babes, your penis isn’t going to make the difference. Everybody’s penis is one-hundred percent less attractive than their face. Women don’t love the penis. If they love the man, they’ll tolerate the penis.”

“It might be time to retire the bathrobe entirely. You never hear a positive news story involving a bathrobe.”

Previous Post: « Trump Up Early Tweeting About the Most Important Thing on His Agenda: ‘Ungrateful fool!’ LaVar Ball
Next Post: London Man Jailed for 2 Years for Smashing a Pint Glass in Gay Man’s Face: WATCH »