You are here: Home / A Slightly Queer Take on ‘Star Wars: The Last Jedi’

There’s a bit of a macro and micro thing happening at the movies this weekend. I’m not talking about Disney’s new merchandising bonanza pairing those miniature “porgs” (think CGI puffins) with towering furry Chewbacca. No we speak of the wide release and limited release divide.

Star Wars: The Last Jedi has opened in 4232 theaters and is obliterating the competition while a bunch of Oscar contenders are playing, not so quietly, in limited release gigs as they rack up SAG and Golden Globe nominations in their pursuit of golden statues. The gay romantic drama Call Me By Your Name is among them having expanded to just 30 screens. We’ll talk Call Me By Your Name next but first [cue yellow text crawl over space] Episode VIII: The Last Jedi

We now return to The Resistance (aka the proudly defiant “Rebel Scum”) who are even easier to relate to know in December 2017 when it feels like the world will be ending any day with each new disastrous move from our own evil empire. (Sigh) If they can just harness the light side of the force, break through that one gerrymandered code, save that one cornered group of people, fetch Luke Skywalker, etcetera… they might live to see another day. 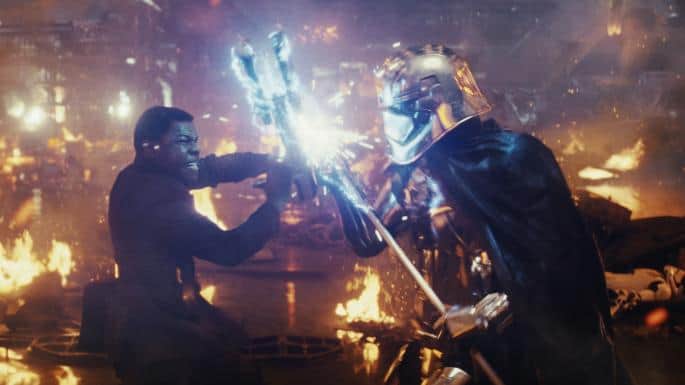 The Star Wars franchise, born 40 years ago this past summer, has such an intergenerational hold on pop culture that people are now, literally, born into it. No wonder people feel they’re an actual part of that galaxy far far away which surely explains some of the calls for representation within it. The powers that be behind the billion dollar franchise have heard the pleas for diversity and we now have the first woman of color to get a prominent role (Kelly Marie Tran as Rose). But this galaxy will never be as diverse as the real world.

Take for instance the recent petition to include LGBT people in that universe. That plea has garnered a lot of traction and interest despite the fact that Star Wars is a largely sexless franchise where love, romance, and companionship (beyond the ‘in the trenches’ soldier kind), are virtually the last thing on anyone’s mind. They’re all just trying to stay alive while escaping / fighting the fascist Empire (now rebranded as “The First Order”). We can safely blame Oscar Isaac’s lip bite while talking to John Boyega’s Finn for opening this queer pandora’s box.

But, lip-biting aside, Star Wars has never been about orientation, unless you’re talking about the light and dark sides of the Force.

Even its single most iconic romantic moment (“I love you” / “I know”) is, if you stop to think about it, purposefully sparse and reflective (not to mention 37 years old) and thus yet another cavernous empty space for everyone to project their own everything into… just like, well, The Force itself. Which is to say that you can project queerness on to virtually any character you like. Have at it! Most of us have already done that with Poe Dameron. (We can all also agree that Mon Monthma is a lesbian, yes?)

The Last Jedi‘s writer/director Rian Johnson, thankful understands all this about identifying and projecting and the broad brush strokes of mythology. He moves us quickly beyond the superbly well-executed but ultimately easy nostalgia of The Force Awakens and into something more present and dangerous and diverse yet still totally amorphous (all the better for you to project on to, my dear).

He doesn’t try to explain The Force away like those awful prequels and their midichlorians but just makes it everything and nothing and quite mystical again complete with new tricks you probably won’t see coming (no spoilers). The focus this time is smartly on the new characters. There’s even dialogue about the need to move on from the past though screen siblings Mark Hamill and Carrie Fisher’s Luke & Leia both bring the gravitas that gives that theme its resonance and texture; You can’t move on without leaving beloved things behind.

[Pause for crying over Carrie Fisher, to whom the movie is dedicated. We already miss her so much and lord knows what these movies will do without her]

Despite the forward motion into Episodes we don’t know the outcome of (which was the chief narrative disaster of Rogue One and the prequel films), Johnson finds clever ways to keep things spare despite all the decorative setpieces. We’re not actually given many more details than we already had on our new charismatic heroes Rey (Daisy Ridley), Poe, and Finn and the boo-hiss villain Kylo Ren (Adam Driver).

Whenever a new Star Wars picture rolls around people lose their minds and overreact in both directions (no, it’s not the greatest movie of all time, calm down / no, it’s not ruining your childhood, calm down). I’m happy to report that this is, overall, a good one. Much of the film is delightful with characters juggled around and randomly paired and colliding with all the zippy fun of playing with your own action figures as a child. The Last Jedi  lifts off into movie bliss a couple of times (albeit fleetingly), usually during the action sequences.

Kylo/Rey’s lightsaber fight is good and there’s a visually sensational climax on a salty planet that has the most potent single use of color in an action film since that parachuting sequence in Godzilla (though it’s still not a patch on Mad Max Fury Road‘s understanding of color for an entire running time) . But The Last Jedi is far from perfect. Let us never speak of a certain Casino planet and the entire subplot that happens there. The film’s running time is 152 minutes and it would be a regular length movie without that visually incoherent and plot-stalling detour. 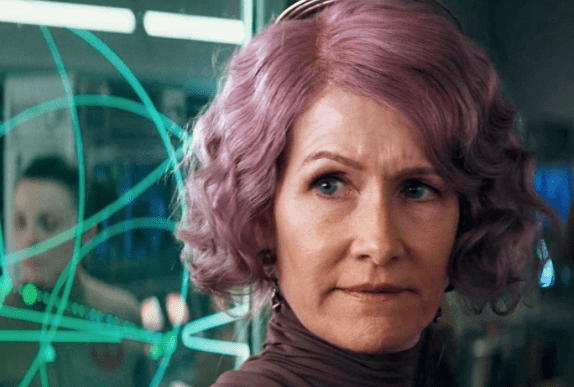 As for the gays feeling represented… while there are still no (out) gay characters, all is not lost. We do get one  ambiguous shot of Poe looking bittersweetly (?) at Finn with a female character. And if watching queen Laura Dern’s purple-haired Vice Admiral Holdo pull a swift impactful move in battle doesn’t recharge your inner rainbow, nothing in this particular galaxy ever will.