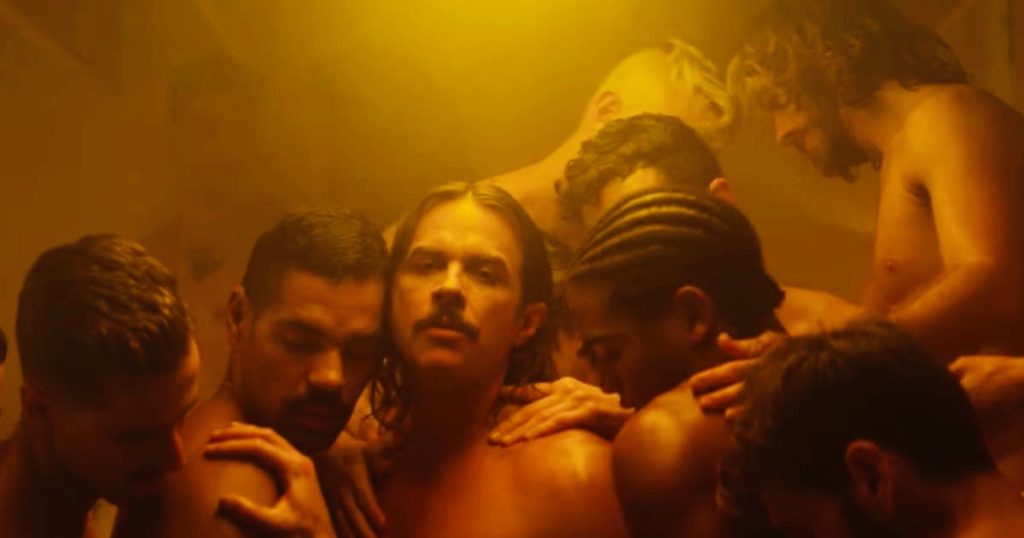 Fischerspooner dropped a video for TopBrazil yesterday, from the upcoming album, Sir, produced by REM’s Michael Stipe. Great song. Sexy video set in an almost exclusively male sex club.  If you like this kind of thing– sexy sweaty men in group adult situations who or may not have some key hot-mess issues, you’re going to want to watch this right away. And then probably again.

“‘The video celebrates a pop aesthetic typically reserved for the female archetype,’ Casey told us over email. ‘It liberates the male form to be sexual, expressive and fearless.’ The ultimate embodiment of the album’s loud, proud, erotically-charged response to the current political climate in the US, some might say.”

There’s a lot more here, though. This isn’t Kylie Minogue’s body pile honoring, “All The Lovers.” The first Fischerspooner lyrics start, “I guess I made a bad decision…we’re in a room….this is doomed.” .

Sure, he agreed to “go all the way,” asked “how do you like your grind,” and is “not opposed to humiliation”, but Spooner’s expressions tell another story. His face is bored then anguished then ambivalent. Then repeat.

It is really good and worth a watch or three if these Fischerspooner kinds of things are your thing.
Some caution in choosing the right venue. It walks a fine line of community standards, and very well could disappear. Definitely not right for many public places, most churches and elementary schools and a good chunk of the middle of the country; definitely not around Trump supportive family members, at uptight work events, in the presence of anyone you are in a position of power or influence over or who might be able to feel coerced.  And i’d add to that, perhaps not with anyone overly interested in you who might get a wrong message.