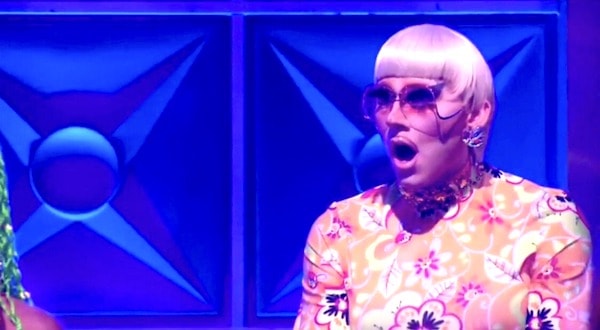 Finally, RuPaul’s Drag Race gave us the queer dating reality competition we’ve been waiting for. It’s got everything: A hot bachelor, insane contestants, tacky sets and plenty of drama.

Let me also say that I would watch 10 seasons of The Bitchelor over one more second of Finding Prince Charming. (Though if/when that show comes back, you best believe I’ll be recapping again.)

Who fell head over high heels, and who rose to the occasion? Find out in our recap below.

Fresh off Thorgy’s elimination (and lewd mirror farewell message) the gals are already feeling a little salty. Ben reveals that if she had bested Shangela in the lip sync, she too would have sent Thorgy home. This creates an opportunity for this season’s reigning villainess, Milk, to toss her two (per)cents into the convo, saying it should’ve been Kennedy to pack her wigs and go.

She picked the wrong diva to diss, though, and Kennedy wastes no time snapping right back. Considering my (lactose) intolerance (ugh, sorry) for Milk, I couldn’t help yelling GET HER at the screen when Kennedy refused to accept Milk’s delusion with a sigh and an eyeroll like everybody else. It’s as if Milk is intentionally coming in with all the hate and nastiness that previous villains like Roxxxy Andrews and Phi Phi O’Hara couldn’t help but exude. Not that Milk might not actually be an insufferable person IRL, but, boy, is she laying it on thick.

Before Kennedy and Milk can come to blows, Ru arrives to give the deets on this week’s challenge. It’s one of Drag Race’s better concepts: A take on the infinitely mockable Bachelor franchise, with stunning, gorgeous, beautiful, hot, hot, hot UnReal actor Jeffrey Boyer-Chapman playing the leading man.

The gals are put in pairs and assigned characteristics like “party girl,” “cougar” etc. Unlike some of the more scripted challenges, this is largely improv. The result is higher highs from the more clever queens, but lower lows from the girls that struggled.

The first pair featured BenDeLaCreme as the boozy, brash and busty “cougar” alongside the “shy virgin” BeBe. Now, I have to pause here to address a popular internet rumor. According to some darker corners of the world wide web, Bebe is truly not here for the right reasons. Playing off the season’s Handmaid’s Tale motif, Bebe is actually a MOLE here to spy on the girls and report back to Ru.

Truly, that is the only explanation for why her lackluster performance tonight didn’t land her in the bottom two. Yes, she was working alongside Ben, doing some of the best work DeLa’s ever done on the show, but that’s no excuse. She gave us nothing, and yet, she gave us everything we always expect from Bebe.

Ben, on the other hand, was fully committed. She definitely hit the requisite cougar notes (cosmo swilling, Xanax jokes, too much cleavage), but she also brought her own odd little touches, like re-eating the mushed up banana off her chest. Most impressive was how she gave us a full character, not just terminally delightful Ben (a major complaint from her original season).

Another known comedy queen, Trixie, faced a tougher time. It really wasn’t her fault, though. For her “fake bitch” character, she came with a plan. From the moment she stepped out of the limo, she was double-speaking into her cell phone and nailing every beat. Her problem arose when she shared scenes with her partner, Milk.

Once again, Milk’s ego was too big to be contained. As the “psycho stalker,” she leaned into the psycho so far she tipped right into shrieking lunatic. Now, there are some who will argue that Trixie should have done more to assert herself, but one of the key elements of this challenge was “don’t speak over your partner.” Had Trixie attempted to talk over Milk, Milk would have just gotten louder and the entire scene would have collapsed. It was the right call for a bad situation.

Aja struggled as well. She was assigned “needy girl,” but gave a strange combination of spoiled and sad. She’d later reveal on the runway that she didn’t know what needy meant, and it showed. She was paired with Kennedy, who overdelivered. It’s easy to forget Kennedy’s season seven Snatch Game win, but she can turn it out when she needs to bring the laughs. Her “party girl” was an over-the-top Bad Girls Club-style mess, in the best way possible. It was a big, broad performance, but it was hard to resist cracking up whenever she was on screen.

The final group, Shangela and Chi Chi played a polyamorous couple with mixed results. Shangela had no problem firing off jokes, machine-gun style, but Chi Chi wilted. All her old confidence issues struck, and she shrunk in the background of her own scene. 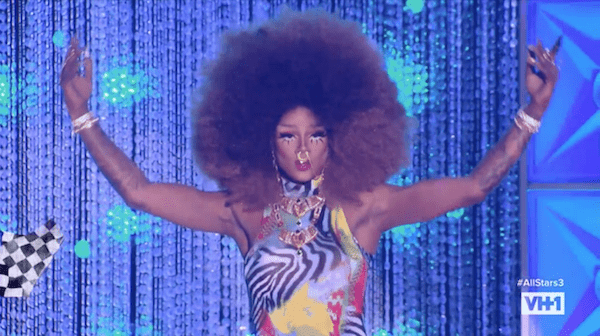 This week’s runway was wigs on wigs on wigs, and the ladies all brought something surprising to the main stage. The judges were delighted with Kennedy and Ben, while Trixie narrowly missed a top two spot thanks to Milk’s domineering.

Chi Chi, Aja and Milk found themselves in the bottom, which was shocking to me because Bebe belonged there more than most of them, and shocking to Milk because she thought she was going to be on top. Not only did Milk flounder in this reality-TV challenge, she’s struggling with reality.

Kennedy makes a power move, declaring that she doesn’t need to consult the bottom three, while Ben’s convos go almost exaclty as you would expect. Chi Chi is unsure she belongs here, Aja knows she goofed but doesn’t feel like this is her time and Milk thinks she is being treated unfairly. Just to underscore how out of touch she is, she claims both the other girls AND the judges want her to stay. That’s not a matter of taste, that’s just nuts.

The lip sync is a sleepy act out of Lorde’s “Green Light.” Ballads rarely make compelling lip syncs (with a few notable exceptions), and this performance never felt like it got out of first gear. (They both needed to channel their inner Camille Grammar, in my opinion.) Ben just looks mad, while Kennedy at least gives dramaw, mawmaw. It’s hard to thrill in just like 90 seconds, but Kennedy at least came ready to tell a story. I wasn’t finger-waving, scream-gagging by the end, but it certainly earned a very genuine polite clap.

Kennedy wins, and in one the most satisfying turns, sends spoiled Milk (again, sorry!) home.

Next week: Snatch Game! Plus: Are we any closer to learning the surprise twist for the eliminated queens?

Where does that leave us? Here’s our rankings.

1. Not too much is changing at the top. Ben ran away with this challenge and made it look easy. It was the perfect blend of sharp and silly that nailed what the judges like to see while showcasing what she does best. This was Ben’s worse lip sync (what was she trying to do with that wig?), but now I’m nitpicking.

2. I wish Shangela brought a little more focus to her character in this challenge. Her jokes mostly landed, but they lacked a real clear point of view. Sometimes she was the dom mama, but some zingers felt too Shangela for me. Her corny runway wasn’t the most gorgeous lewk, but the judges (including guests Boyer-Chapman and Constance Zimmer) had the best time riffing off it.

3. It’s getting harder to justify Trixie’s spot toward the top of this list, but I’m an unapologetic fan. This should have been her week, but the stars just did not align. If she can’t shine in next week’s Snatch Game, I’ll have to seriously reassess her standing. Still, she’s giving us solid performances each week, and I can’t bare thought of losing her for one-liners like “Tatianna ‘Same Parts’ Dennis the Menace fantasy” alone.

4. If I were basing these rankings on this week alone, Kennedy would easily take top honors. She was a thorough star. She stole each of her scenes in the challenge, looked gorgeous on the runway, made the most of her time in the lip sync and then gave us an iconic Drag Race moment with her elimination choice. Ross summed up my feelings (and likely many others) when he rightly asserted that Kennedy, despite her traditional pageant background, can easily slay comedy. We’re post labels now, baby. Gun to my head: Barring any elimination shenanigans, Kennedy is making Top Three.

5. I’m not sure how to address Bebe anymore, really. I can’t shake that conspiracy theory, which makes it tough to take her seriously. If I had to step back and really evaluate her chances overall as a legit competitor, this week’s performance definitely weakened her standing. She’s still pretty middle of the pack. 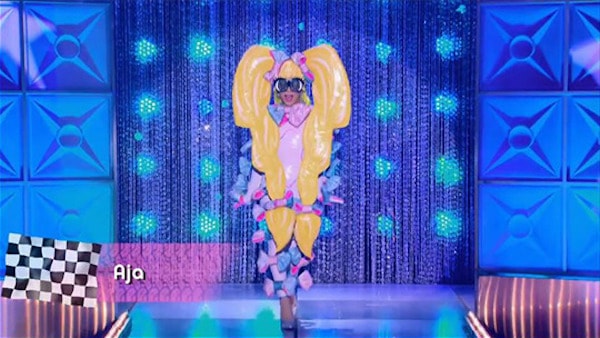 6. Sure, Aja definitely dropped the ball in a big way this week, but her kawaii runway look was a total stunner. If she can keep bringing that level of creativity, she’ll hang on a few weeks longer.

7.Even though I was thrilled to see Milk’s time expire (I’m a monster!), she wasn’t the worst this week, truthfully. Unfortunately, I think her All Stars appearance has probably done more to hurt her reputation than help it.

8. I hate to admit it, but, if I’m being honest with myself, Chi Chi belongs on the bottom of the list, and probably deserved to go home. I think she’s so, so talented, and her insecurities are something so many people can relate to. I know I can. Chi Chi is an incredible, lovable queen, but if she’s going to stand shoulder-to-shoulder with these other girls, she’s got to borrow some of Milk’s confidence. Lordt knows she’s got plenty to spare.

How would you rank the remaining queens? Sound off in the comments!