ANTONIO SABATO JR. Running for Congress in California, Sabato Jr. insists that Obama is a Muslim, won’t be told otherwise. “No, what I was saying was he changed his name to ‘Obama’ because he followed the Islam religion when he was growing up. So I felt once you’re in that religion, you stay for the rest of your life.” 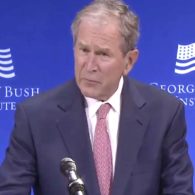 CLEAR EVIDENCE. George W. Bush rebukes Trump on election meddling: “Whether (Russia) affected the outcome is another question. It’s problematic that a foreign nation is involved in our election system. Our democracy is only as good as people trust the results.”

MIDTERMS. Democrats are set to target more than 100 Republican-held congressional districts. “At House Democrats’ annual conference Thursday, Rep. Ben Ray Lujan, D-N.M., the chairman of the Democratic Congressional Campaign Committee, is expected to tell colleagues the committee is expanding the battleground to include 101 Republicans — the largest in a decade, a Democratic source familiar with the matter told NBC News.”

MAYBE NOT SO BRIEF. A history of LGBTQ characters, people, mentions and moments on U.S. TV from Boy Culture.

GMHC. The country’s largest nonprofit care provider for those with HIV/AIDS is changing locations: “The organization, which serves more than 15,000 people each year, is downsizing in the move from the 165,000 square feet it occupies now at Brookfield Property Partners’ 5 Manhattan West.”

TRAILER OF THE DAY. Tom Hardy in Marvel’s Venom.

LOVE IT OR HATE IT TOY OF THE DAY. The Pop It Pal.