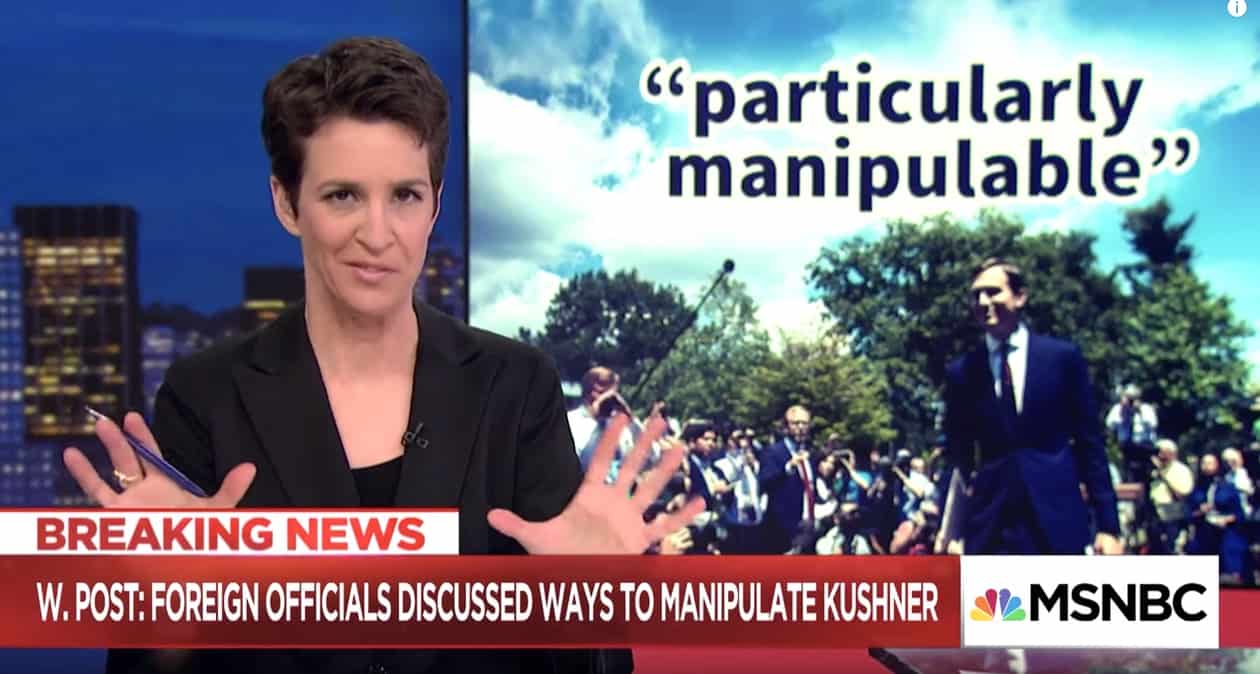 But that was just the tip of the iceberg.

All White House aides working on the highest-level interim clearances — at the Top Secret/SCI-level — were informed in a memo sent Friday that their clearances would be downgraded to the Secret level, according to three people with knowledge of the situation…

…Moss said Kushner and others will be debriefed by officials in the White House security office, an event scheduled to take place Thursday, according to a person with knowledge of the situation. “They’re going to give him a list, ‘Here’s what you’ve been debriefed from, you’ve been debriefed from this program and that compartment, you no longer have any access to it, and any breach of that would be a serious security violation and a possible criminal issue.’”

But The Washington Post really dropped the bombshell last night when they reported that officials in the United Arab Emirates, China, Israel and Mexico, had “privately discussed ways they can manipulate Jared Kushner, the president’s son-in-law and senior adviser, by taking advantage of his complex business arrangements, financial difficulties and lack of foreign policy experience,”

Also: “H.R. McMaster, President Trump’s national security adviser, learned that Kushner had contacts with foreign officials that he did not coordinate through the National Security Council or officially report. The issue of foreign officials talking about their meetings with Kushner and their perceptions of his vulnerabilities was a subject raised in McMaster’s daily intelligence briefings, according to the current and former officials, who spoke on the condition of anonymity to discuss sensitive matters.”

The article also notes that “Officials in the White House were concerned that Kushner was ‘naive and being tricked’ in conversations with foreign officials.”

All this amid a day of interrelated news coming out of the White House which had Rachel Maddow asking “where do you want to start tonight?”

Watch her lay it out, and then be sure not to miss the clip below that.

Later, Rachel Maddow discussed the news about Kushner and spoke with Shane Harris, who led the writing team on the WaPo story, to discuss the implications of these change and the news about foreign government’s attempting to exert influence through the president’s family’s business dealings:

Previous Post: « Laverne Cox Lays Down a ‘Beat for the Gods’ – WATCH
Next Post: Gus Kenworthy Reveals the Homophobic Messages He Gets Online: ‘Go Die of AIDS’ »