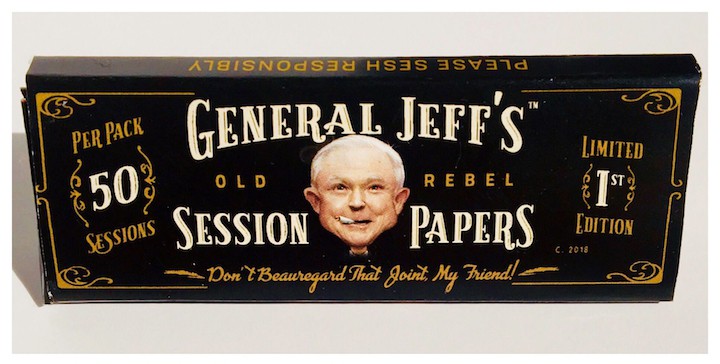 The group, called #JeffSesh, says on its website that it is a campaign to tell Attorney General Jeff Sessions:  “We’re not criminals, junkies or idiots. Regular Jeffs all over the country — good, responsible, patriotic Americans — have a sesh now and then… and it’s OK!”

Two versions are available, black and white. Both display Sessions.

Adds the group on its site:

“Cannabis provides relief and uplifting energy to millions of users, from serious medical patients in 29 states to recreational consumers in 8 states. 12 states are considering new legalization measures this year.

Every time you sesh with any brand of JeffSesh papers, you’re helping keep the law moving forward—and not back to the Nixon era.

A priority declared by the previous administration encouraged federal investigators to respect states’ legal cannabis rights and prioritize other concerns, like national security.

Jeff Sessions rolled that back.

#JeffSesh tells him we’re not going back.

To remind him that 64% of the country approves of legalization, as of the latest count by Gallup.

“Marijuana in its natural form is one of the safest therapeutically active substances known to man. By any measure of rational analysis marijuana can be safely used within a supervised routine of medical care. … It would be unreasonable, arbitrary and capricious for DEA to continue to stand between those sufferers and the benefits of this substance in light of the evidence in this record.”