Boston Bruin Brad Marchand has been making headlines for a unique form of agitation during the game: he has a fondness for licking and kissing opponent’s faces.

As in this recent game when he gives it to Leo Komarov of the Toronto Maple Leafs:

Marchand has given it to Komarov before:

Reporters asked Marchand why he did it.

Said Marchand: “He keeps trying to get close to me. I don’t know if he’s got a thing for me or what. He’s cute.”

What is it about Komarov that makes you want to cuddle with him?

The NHL reportedly told Marchand to cool it, which Marchand denied.

The NHL told USA Today on Friday that Marchand is right:

“No, we did not contact the Bruins or Brad Marchand regarding this incident,” NHL Deputy Commissioner Bill Daly told USA TODAY Sports. “It’s just not true.”

Though ESPN published a conflicting reportl ast night: “The NHL felt Marchand’s actions were a little less cute. A league spokesperson confirmed a report by Sportsnet that the NHL demanded Marchand not repeat that particular antic again. A message was communicated to Marchand through the series’ supervisor of officials Mick McGeough.” 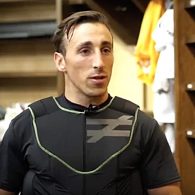 In any case, you may have read about Marchand on this site before, when he spoke to ESPN about a tweet he wrote in late December denouncing a fan who called him a “fag”, and about his support for gay people in general.

Added Marchand at the time: “I want to stand up for what I believe in, and I don’t think it’s right when people say things or bash people because of their sexual orientation. I have friends who are in gay relationships, and I don’t think it’s right for people to be against that. Everyone is allowed to find love whatever way that is, so I felt like that was a time to say something, especially nowadays. We’re in 2017, and things are a lot different than they were 100 years ago. We’re all evolving to be equal, and that’s the way things should be.”

Marchand also said that pro hockey is ready for a gay player: “Guys would accept that, no question. We’re a team in the [dressing] room and a family. It doesn’t matter what different beliefs guys have, or where they come from, or whatever the case may be. Guys would accept it. Again, in the room we’re a family. That’s the way it is on a hockey team, and that’s the way it will always be…It’s bound to happen at some point, and when it does, it will be accepted.”