ADAM SCHIFF. Trump violating emoluments clause by making deal with China to save sanctioned telecom company. “I certainly view this as a violation of the emoluments clause, yes. And many others as well, both foreign, in terms of the business effort to expand the Trump Organization.”

President Xi of China, and I, are working together to give massive Chinese phone company, ZTE, a way to get back into business, fast. Too many jobs in China lost. Commerce Department has been instructed to get it done!

Rep. Adam Schiff on President Trump's attempt at a deal with Chinese company ZTE: "I certainly view this as a violation of the Emoluments Clause, yes" https://t.co/AvakVRNzYd pic.twitter.com/eMAfNLjzFv

POLL NUMBERS. Trump suddenly believes in them: “Can you believe that with all of the made up, unsourced stories I get from the Fake News Media, together with the $10,000,000 Russian Witch Hunt (there is no Collusion), I now have my best Poll Numbers in a year. Much of the Media may be corrupt, but the People truly get it!

Can you believe that with all of the made up, unsourced stories I get from the Fake News Media, together with the $10,000,000 Russian Witch Hunt (there is no Collusion), I now have my best Poll Numbers in a year. Much of the Media may be corrupt, but the People truly get it!

BACK TO BRAVO. Project Runway is returning to its roots.

$1 MILLION. Mystery gift to Trump’s campaign traced to conservative judicial activists: “The $1 million inaugural gift came from a Northern Virginia company called BH Group, LLC. Unlike other generous corporate inaugural donors, like Bank of America and Dow Chemical, though, BH Group was a cipher, and likely was set up solely to prevent disclosure of the actual donor’s name. Almost nothing is known about the company, including who runs it or its reason for being beyond writing a seven-figure check on Dec. 22, 2016, almost a month before Trump was sworn in.”

2018. Dems ready to run on health care: ‘They’ve got a unified message blaming Republicans for “sabotaging” the health law, leading to a cascade of sky-high insurance premiums that will come just before the November midterm elections. They’re rolling out ads featuring people helped by the law. And Tuesday, they’re starting a campaign to amplify each state’s premium increases — and tie those to GOP decisions.

WATCH: @JulianCastro is considering a run for president in 2020 & tells us he will "make a decision by the end of the year." pic.twitter.com/TpXmpOyBri 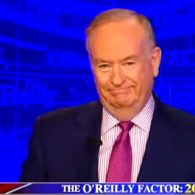 BILL O’REILLY. He’s coming back? “A year after O’Reilly’s abrupt exit from Fox News, where he was the top-rated host in cable news, the controversial anchor — who was forced out after the disclosure of sexual-harassment allegations and settlements paid to alleged victims — is in advanced discussions with Newsmax about developing a new show, we’re told. Newsmax is also chasing other former Fox News talent — Greta Van Susteren and Eric Bolling have been approached to join as hosts of hourlong shows in prime time. Bolling already has a deal with CRTV for a digital show.”

CAMEROON. Police arrest 25 men for suspected homosexuality: “Police arrested seven people in the cabaret, including a dancer, a waiter and the security guard. They then raided a gay movie theater in the  Emombo I Crossroads area and arrested 18 people there. After that, all 25 people were taken to the central police headquarters, where they were questioned all night. One police officer inadvertently revealed the extent of the interrogations in a conversation with a representative of LGBT rights attorney Jathan Ndongo.”

PEACE CORPS. Gay men fired after testing positive for HIV. “Despite effective treatment — within a month, medication had slashed the amount of HIV in his blood to an undetectable level — the Peace Corps notified Tin that because of his new HIV diagnosis, his assignment in Cambodia had been terminated.

FLAUNTING IT. Ricky Martin and Jwan Yosef hit the gym.

DENVER. Longtime gay bar Denver Wrangler closing its doors. “The bar will close on June 25, according to an announcement on the bar’s website. A farewell beer bust, Wrangler’s long-running event that supports local charities, will be held on June 24. A Pride beer bust is scheduled for June 17.

SPACE ROCK. Asteroid the size of a city block to whiz by Earth today: “Asteroids this size approach about this close about once every decade or so, on average,” Paul Chodas, manager of the Center for Near Earth Object Studies at NASA’s Jet Propulsion Laboratory told the Canadian Broadcasting Corporation. “So it’s a fairly rare event, a special opportunity, a chance to observe it scientifically.”

THE MEGHAN EFFECT. Meghan Markle expected to boost British economy to the tune of $1.4 billion.

PERSONAL BALL PIT OF THE DAY. A dog’s heaven.

TOO HOT FOR TUESDAY. Quinn Hopkins.