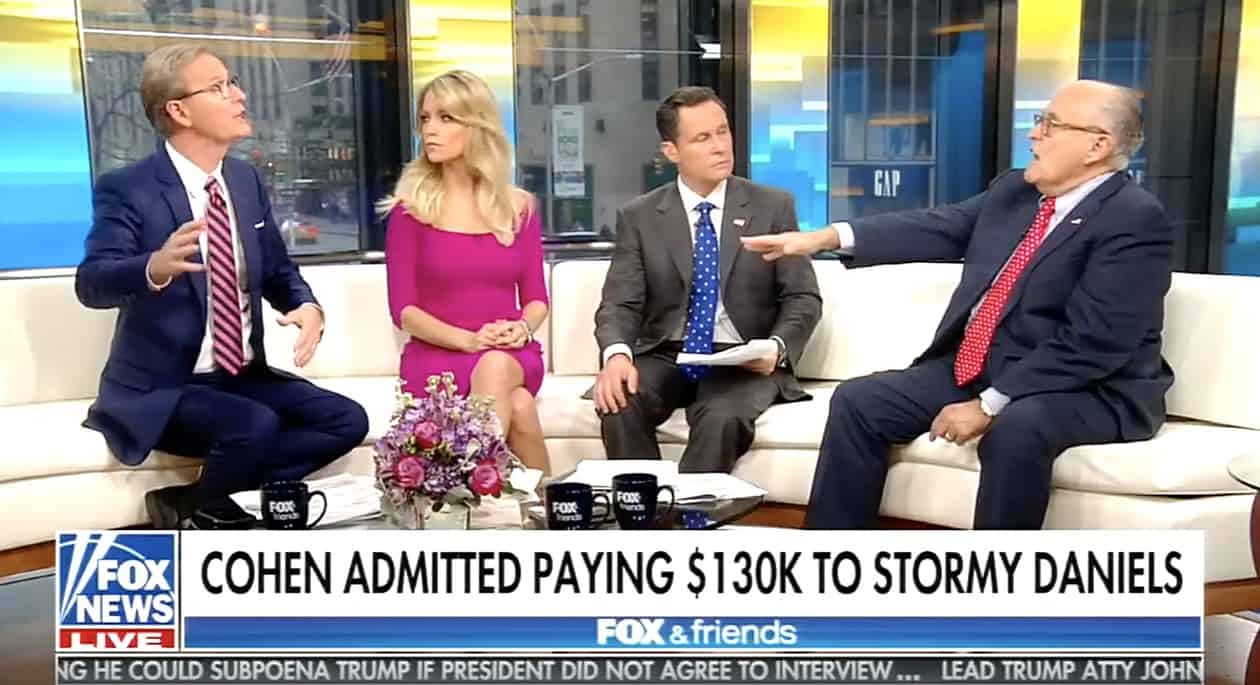 Rudy Giuliani paid a visit to FOX & Friends on Thursday morning to do damage control after exposing Donald Trump in a massive lie on Thursday night, but ended up making things worse.

RELATED: Trump Does Damage Control on Twitter After Rudy Giuliani Exposes a Whopper of a Lie About Stormy Daniels

Said Brian Kilmeade to Giuliani: “The president said ‘I didn’t know anything about it.’ You came out last night, you looked at the receipts. This was done through private. Nothing to do with campaign funds…”

Added Kilmeade: “It’s been done through a retainer fee. And he eventually got paid back. And he just found out about it. Just now. And you going through this… And the president tweeted this morning to further explain…”

Said Giuliani, responding to Trump’s tweet: “I don’t think it’s any contradiction to that. That’s what I said last night. People were indeed surprised, which is why I think this is a tweet that’s very valuable. The president indicates he understood it. He didn’t know the details of this until we knew the details of it which was a couple weeks ago. Maybe ten days ago. Remember when this came up. October 2016. I was with him day in and day out then. I can’t remember the details of what happened.”

Added Giuliani: “I know $130,000 – I don’t want to demean anyone but it seems like a lot of money – it’s not when you’re putting 100 million dollars into your campaign. It isn’t pocket change but it’s pretty close to it in the end.”

When told it sounded like the story is changing, Giulani added: “He was definitely reimbursed.”

Asked Ainsley Earhardt, “Why did he say he wasn’t?

“If we had to defend this as not being a campaign contribution,” added Giuliani, “I think we could do that. This was for personal reasons. This was the president had been hurt personally, not politically. Personally so much, and the first lady, by some of the false allegations. That one more false allegation – six years old – I think he was trying to help the family. For that the man is being treated like some kind of villain…It wasn’t for the campaign. It was to save  – not their marriage so much as their reputation.”

Then, despite claiming the payment was not political but personal, Giuliani added: “Imagine if that came out on October 15, 2016, in the middle of the last debate with Hillary Clinton! … Cohen didn’t even ask. He made it go away. He did his job.”

Giuliani defended the payment made to Daniels this morning on Fox & Friends, saying it had to happen because otherwise the story would have broken right before the election. He's explicitly tying the payment to the campaign. Again, a Trump lawyer opened his mouth & made it worse.

Whatever happens @foxandfriends, please do not stop helping our case week in and week out by having Mr. Trump and Mr. Giuliani appear and make damaging stmts. You are truly THE BEST; where can we send the gift basket? #basta

Previous Post: « Trump Does Damage Control on Twitter After Rudy Giuliani Exposes a Whopper of a Lie About Stormy Daniels
Next Post: Christina Aguilera Releases ‘Accelerate’ Music Video, Ahead of First Album in Six Years »