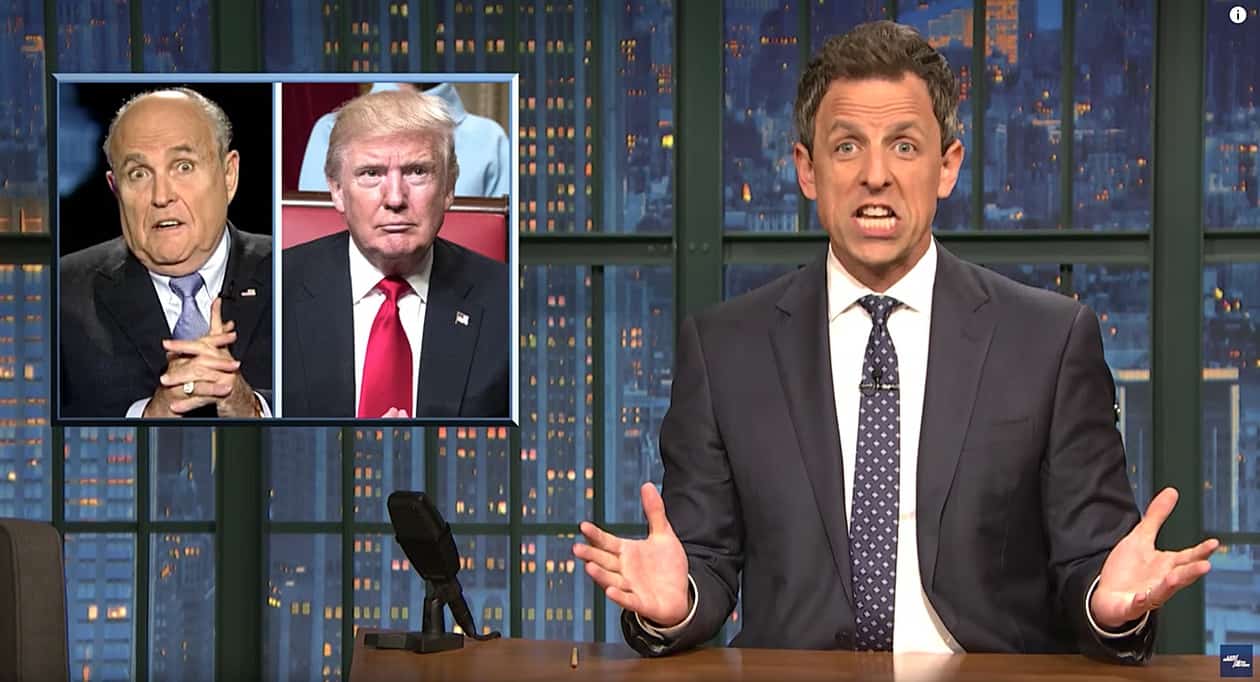 Seth Meyers ripped Rudy Giuliani in last night’s ‘A Closer Look’ statement, looking at his disastrous week of TV interviews, laughing at Trump’s explanation that he “just started” and needs to get “his facts straight.”

Said Meyers: “Yeah, give the kid a break! He’s only 73 going on Nosferatu. He’s a former mayor and U.S. attorney who’s now the lawyer for the President of the United States and Trump talks about him like he’s a trainee at Chipotle.”

Trump later told the press to “learn before you speak” with regard to the Stormy Daniels payments.

“Learn before you speak?’ You should learn to speak before you speak. Seriously, if it’s so simple, then why don’t you just explain it? Trump’s only move when he lies is to lie so confidently that you’ll think you’re crazy.”

When confronted about his lie about the Stormy payments, Trump then snarled at reporters to “look at what [he] said” with regard to the payments.

So Meyers revisited Trump’s statement on Air Force One that he had no knowledge of payments to Stormy Daniels, quipping: “So either he’s lying then or he’s lying now or that’s really Alec Baldwin on the plane. Also, is it me or does Trump always seem to say stuff that’s incriminating while there’s an engine running behind him? Trump’s only going to agree to an interview with Robert Mueller if they  on a runway at La Guardia.”

Meyers then turned to Giuliani’s appearance on Judge Jeanine in which he pretended to pet Hillary Clinton.

In related news, Giuliani insisted today that Trump is urging him to do more TV appearances:

The comment contradicts a report that Trump is considering blocking Giuliani from more media appearances after a series of controversial interviews in recent days.

“The president is encouraging me to do more of them. I try to keep them under control,” Giuliani told NBC News’ Kristen Welker.

He added that Trump feels the interviews have “organized his supporters” and that the president is “very comfortable” with the strategy.