PULSE NIGHTCLUB. Interim memorial opens to the public: ‘In a statement, the onePULSE Foundation said they hope the temporary place will “give families, survivors, first responders and the thousands of people who come each year a space to pay their respects and reflect.” Planning and designing for a permanent memorial and museum is underway.’ 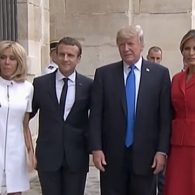 IRAN NUCLEAR DEAL. Trump tells Macron he’s pulling out: “Mr. Trump’s decision unravels the signature foreign policy achievement of his predecessor, Barack Obama, isolating the United States among its allies and leaving it at even greater odds with its adversaries in dealing with the Iranians. The United States is preparing to reinstate all sanctions it had waived as part of the nuclear accord — and impose additional economic penalties as well, the person said.”

THE HOUSE OF VALENTINO. Frances McDormand sold her bonkers get-up at the Met Ball. 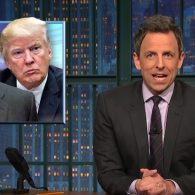 SETH MEYERS. Trump wanted me to apologize on-air for making fun of him at the White House Correspondents’ Dinner.

MIDTERMS. Giuliani says Mueller probe will motivate Trump voters: “It has his people much more excited now than before.”

NANCY PELOSI. She’s ok with Dems opposing her for Speaker as long as they win the election. “I think if they have to do that to win the election, I’m all for it. … Just win, baby.”

FALSE FLAG. Russian hackers posing as ISIS send threatening messages to Army wives. “We know everything about you, your husband and your children,” the Facebook message continued, claiming that the hackers operating under the flag of Islamic State militants had penetrated her computer and her phone. “We’re much closer than you can even imagine.”

MINDFUL DRINKING. Could it save your life? 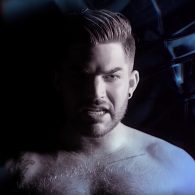 QUEEN. Adam Lambert is headed to Vegas for a limited 10-day engagement.

AUSTRALIA. Northern Territory apologizes for anti-gay laws: ‘Gunner said gay people had been forced to live in fear and secrecy and their lives and careers had been ruined. “Today is about making right,” he said. “It is about [making right] hurtful and discriminatory laws tolerated, supported or actively perpetuated by Northern Territory governments … We were wrong.”’

ACCIDENT AUTOPSY. Uber self-driving car that killed pedestrian was tuned too far to account for false positives: ‘The car was travelling at 40mph (64km/h) in self-driving mode when it collided with 49-year-old Elaine Herzberg at about 10pm on 18 March. Herzberg was pushing a bicycle across the road outside of a crossing. She later died from her injuries. Although the car’s sensors detected Herzberg, its software which decides how it should react was tuned too far in favour of ignoring objects in its path which might be “false positives” (such as plastic bags), according to a report from the Information. This meant the modified Volvo XC90 did not react fast enough.”

Previous Post: « Seth Meyers Mocks the Trump-Giuliani Disaster as Rudy Says Trump Wants Him to Do More TV Interviews: WATCH
Next Post: Zachary Quinto and Miles McMillan Guide Us on a Tour of Their NYC Apartment: WATCH »