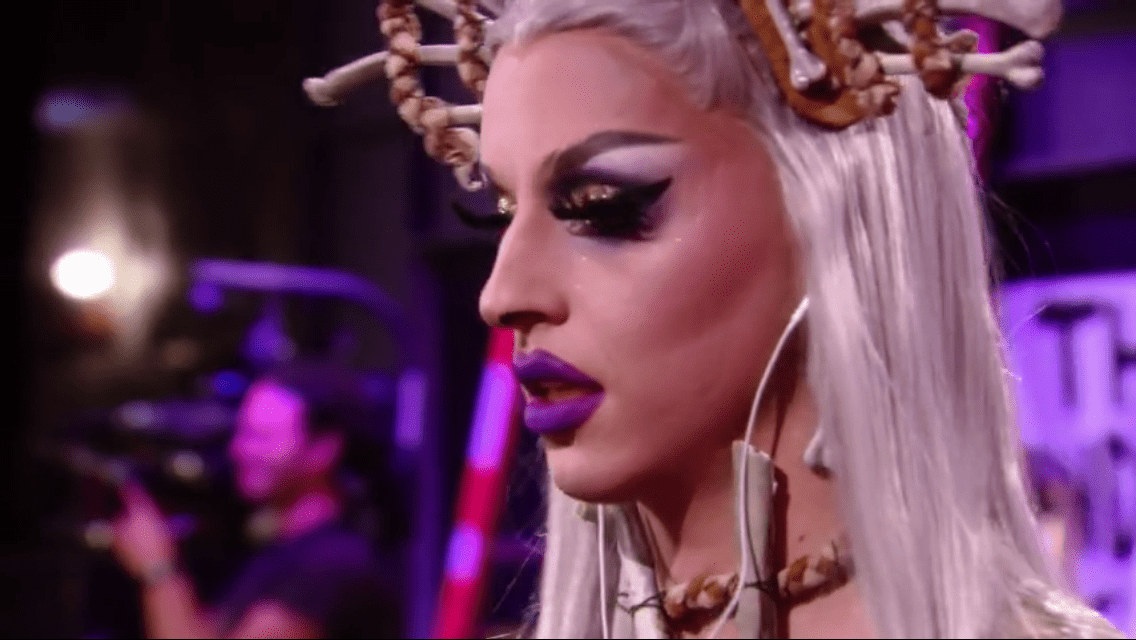 One of the joys of watching reality TV is seeing larger-than-life personas act with an utter lack of self-awareness. Could you imagine watching the dinks on The Bachelor self-reflect? Hard pass.

So last night’s RuPaul’s Drag Race, which tasked the girls with confronting their inner “saboteur” was a slog. At every turn, the premise of each gal’s “evil twin” became more and more difficult to comprehend. Their first instincts barely added up, Ru only complicated things with her workroom visit and the final judging felt completely random.

Really, what was anyone talking about for these 90 minutes?

Although clearly intended to help the remaining queens conquer their inner demons, given what a calculating and savvy bunch we have left, it seemed to drive the ladies even further into their own heads. Ten seasons in, the show has created a generation of queens modeled in the Drag Race mold. Tonight’s tech-heavy, funhouse mirror of a challenge felt like it fried a lot of these queens’ Call-Me Motherboards.

The challenge may have been overly cerebral, but the execution was even more high-concept, resulting in a runway with an odd edit that made the whole affair even more mind-boggling.

Before Mama Ru can crack open the queens’ psyches, they’ve got one of the more bizarre mini-challenges to conquer. Along with guest Cheyenne Jackson, Ru asks the girls to drag out a pancake — yes, a pancake — to present to Miss Jackson. The inspiration is drag brunch, and the girls need to use a variety of sweet and savory food to create their own Resting Brunch Face. While very on-trend, it’s an odd thing to judge.

Cheyenne picks Asia’s “around the corner” girl “Panquisha” for the win, but we were gagged for Aquaria’s Pancake’s Labyrinth, complete with eyeballs on the hands. (Also, shout out to the editors for cutting to Asia when Kameron describes her pancake’s marshmallow veneers.)

For this week’s maxi challenge, each queen will be portraying their best selves as well as their inner saboteur. Anyone who’s followed Ru’s philosophical waxings is familiar with the concept of the inner saboteur. (I believe it was first introduced into the Drag Race canon during All Stars season 2, when the remaining queens guested on What’s the Tee? and Katya discussed her own anxious demons.)

It’s a worthwhile exercise for personal growth, but a difficult thing to master in the confines of a competition. It reminds me of that dreaded (and dumb) job interview question: What’s your biggest weakness? It’s a tightrope walk of displaying candor while still telling them what they want to hear.

None of the queens seem like they have a firm grasp on the task. You can tell because before rushing to their individual stations, they all sit around a table tentatively asking one another “What do YOU think my inner saboteur would say?”

Eurkea wonders if her evil twin is being too perfect, basically. Too polished, too tailored, too precise. Which, what? The other girls seem to get what she’s saying, elaborating that she’s a little “Suzy Creamcheese,” which would be a GREAT name for a queen working drag brunch.

Then the group turns its attention to Cracker, and things feel a little personal. They tell her she over-explains, she apologizes too much and, most severely, she’s an emotionless robot.

Wow. The workroom needs a sign: “DO NOT FEED THE INNER SABOTEURS.”

If Cracker was cracking with the just the other queens’ feedback, she really crumbles when Ru comes through. Mama Ru wants her to stop caring what other people think, but it’s obvious Cracker is having a hard time letting go of that control.

All of Ru’s visits are so chockablock with her signature spiritual aphorisms, I can’t even tell if she’s countering or affirming each queen’s saboteur. She talks to Asia about finding comfort in misery, Eureka is propelling herself with negative energy, Aquaria is afraid she’s a fraud and Kameron is using her shyness to pull more attention to the ego.

I’m usually fully moved by Ru’s philosophical bits to the point where I’m speaking in tongues. However, what usually seems profound (or at least coherent) on the podcast feels like much more of a grab bag of ideas in this edit.

To make things even more chaotic, using technology heretofore unseen since Lindsay Lohan parent-trapped Dennis Quaid and Natahsa Richardson, the queens will share the runway with their inner saboteurs via TV magic.

Ru demonstrates with her own evil twin, Rude Paul, and it’s … not great. Where are Michelle and Carson to direct when you need them?

As the ladies get ready, they discuss how doing their drag has impacted their confidence, on and off stage. The most memorable moment is Aquaria’s soon-to-be-on-shirts catchphrase, “If you pee clear, cheer!” There’s going to be a whole lotta folks on Grindr using that one to get into some watersports, let’s be real.

On the mainstage, the runway feels like it drags on forever (no pun intended). Each gal narrates a voiceover for both characters, and they are also … not great. We have to watch them pantomime reactions to themselves and everyone just seems so tired. This must’ve taken ages to film, and, frankly, it wasn’t worth it.

Kameron kicks off with a narration that reminds me so much of Kimora Blac’s “Funky Monkey” stilted delivery, I can’t help but giggle. She presents an ice princess for her good twin, while the evil “Katrina” is like a post-apocalyptic, feral inverse of the same lewk. They both feel more Comic Con than Drag Con.

Eureka comes out as her good twin dressed in an outfit ripped right from Cher Horowitz’s Clueless wardrobe. She leads with her trademark self-love and body positivity. Her evil twin is Divine-inspired, going in on Eureka’s attention-seeking and over-reliance on humor about her weight.

Cracker makes a stunning entrance that guest judge Lena Dunham would go on to describe as “Marie Antoinette by way of Sofia Coppola.” Unfortunately, her evil twin, Miz Crumbs, looks like she’s wearing a costume leftover from the 1994 live-action Flintstones film.

In some of the most thrilling lewks we’ve seen, Aquaria comes out in a breathtaking lavender ensemble with a say-something hat that I just adore. Even more sickening is her evil twin outfit featuring a mix of cheetah and ocelot prints, exposed bones down her spine and a unique, 3-D printed bone mask that’s giving me sexy Cubone vibes.

Had she not followed Aquaria, Asia’s runway would have made more waves. First, she was a sparkly goody two shoes in rhinestones with a Nickelodeon orange wig. Her evil look was the most dramatic transformation, going very dark with no wig, menacing makeup and a string of deflated balloons (a callback to her good twins bright, orange bundle).

When it comes to the outfits, the judges are fully gagged for Aquaria, both good and evil. They also like Asia, but Aquaria garners comparisons to Violet Chachki, Chad Michaels and Raja — all winners, lest you forget. Ru would go on to call Aquaria’s evil look one of the best in Drag Race herstory.

Eureka receives mostly praise as well, with extra points for her commitment to character. Kameron gets read for being a little too costumey, and Cracker’s sloppy second look can’t be saved by her cotton-candy homage to Versailles.

As for the feedback about the individual voiceovers, it’s all over the place. Having watched the episode several times, I still can’t quite put my finger on how they were assessing who went deep enough and who didn’t. All the gals seemed to be pretty tough on themselves, but the measures of success aren’t clear.

No T, no shade, but I think the winners were the ones that most validated Ru’s amateur psychoanalysis of each queen. Truly, that’s the only Ru-bric that matters.

Ru keeps the evil twins on the runway to ask who should go home. Kameron kops out and pulls the “my biggest competition” card, choosing Aquaria. Based on the critiques, Eureka picks Cracker; Cracker and Aquaria pick Kameron. Asia picks Cracker, but she goes in deep, saying she’s not a star. Yikes. I think they were all amping up the mean as their “evil” counterparts for the bit, but, man, that stings.

Aquaria takes the win, with Asia close behind and Eureka declared safe.

Kameron’s cartoony clothes and surface-level reads land her in the bottom with Cracker, a queen that’s likely outperformed Kameron this season overall, but committed the greatest Drag Race sin: Not heeding Ru’s warnings. She never got out of her own head, no matter how strongly Ru encouraged her to stop self-producing.

The lip sync isn’t our most thrilling. Cracker and Kameron both give solid performances, but the mid-tempo funk track, “Nasty Girl” by Vanity 6, doesn’t have a ton of big moments to exploit. Kameron just barely edges out Cracker, capping off her performance with some impressive flooreography that makes good use of those obliques.

Ru saves Kameron once again, and she sends Cracker back to Harlem.

Where does that leave our remaining girls? Find out in our rankings below, and leave yours in the comments!

1. Based on number of wins vs. number of times in the bottom, I think Aquaria is statistically in the lead. (Though, honestly, I’ve never been great at math.) The fact Ru sees her in the same company as Raja, Chad and Violet bodes well. I thought she looked incredible on the runway, and she really put her all into her performance. It’s a shame she got the villain edit earlier this season, because now we can see the lovable weirdo she really is.

2. Asia has earned her spot in the top three, for sure. A solid performer with a sparkling personality that outshines even her most thoroughly studded tights, Asia has been the heart of this season. (Sorry, Monique.) Asia is funny, she calls out people on their nonsense and she has given some of the best runway lewks. i don’t know if she’s as exciting as Aquaria or as marketable as Eureka, so the crown may be just out of her reach.

3. If I had to guess who Ru would choose as the winner of this season, my money would probably be on Eureka. We’re long overdue for a big gurl to win, the narrative satisfaction of her triumphant return is too sweet to ignore and she’s been a strong competitor. I did not love the good twin look tonight. I thought the white shirt under the vest looked awfully sloppy, and that boxy jacket gave her no shape whatsoever. I appreciated the nod to Clueless, but that fit was jacked. The judges have let a lot slide from Eureka.

4. I’m not denying this was a rough week for Cracker, but coming off last week’s win, you’d think she’d get a one-week grace period. That French court ensemble was so good, and I liked her narration. The evil outfit was lacking, but come on. I know at this point, losing anyone is going to be tough, but it didn’t feel time to send Cracker packing.

5. If anyone’s journey feels like it’s over, it’s Kameron‘s. After three trips to the bottom, she’s just giving us Nina Bo’Nina Brown sadsack backstage now, and it’s insufferable. I think Kam is a killer queen and certified lip sync assassin, but we’ve seen all there is to see. She’s fierce, but I don’t see her getting over her own internal roadblocks in time to surge at the end.

Previous Post: « ‘I Have an Absolute Right to Pardon Myself,’ Trump Yells at Reporters – WATCH
Next Post: Randy Rainbow’s Salute to the ‘Commander of Cheese’ is a Big Musical Gas: WATCH »