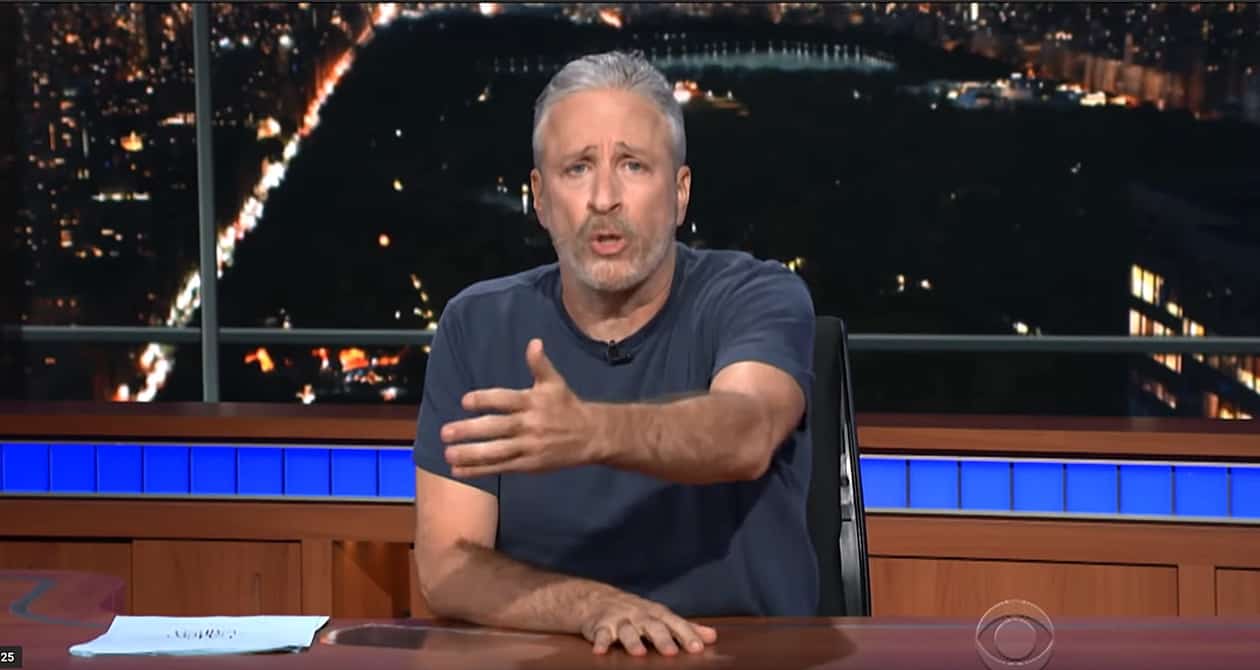 Jon Stewart made a welcome return to The Late Show with Stephen Colbert on Thursday night, unleashing an appropriate rant about Trump’s policies, but particularly his habit of layering them with “an extra layer of gleeful cruelty and dickishness.”

Began Stewart: “Hello, Donald. It’s me, the guy you made sure everyone knew was Jewish on Twitter. I know you’re upset about all the criticism you’ve been taking in the ‘fake news’ and the ‘fake late-night shows.’ It’s just we’re all still having a little trouble adjusting to your presidency as it goes into its…500th year.”

Everything’s off its axis, it’s a little unusual,” he added. “Apparently, Putin and Kim Jong Un are noble, intelligent role models, and Canada’s a bunch of giant assholes. That’s hard to get used to. You’re redoing the post-war alliances, but this time we’re with the axis powers. If there’s one hallmark to your presidency that I think we’re finding most difficult, it’s that, no matter what you do, it always comes with an extra layer of gleeful cruelty and dickishness.”

He explained: “It’s not just that you don’t want people taking a knee, it’s that they’re sons of bitches if they do. It’s not just denying women who accuse you of sexual assault, it’s saying they were too ugly anyway. You can’t just be against the media, they’re ‘enemies of the people.’”

“Which brings us to immigration,” continued Stewart. “Boy, you f**ked that up.”

Added Stewart: “It’s the seminal example of the Trump doctrine…Donald, you could have absolutely made a more stringent border policy that would have made your point about enforcement. But I guess it wouldn’t have felt right without a Dickensian level of villainy.”

And then a big zinger: “You may be orange, you may like hamburgers, you may be a clown, but you are no Ronald McDonald.”

Then he had a plan for the so-called dealmaker: “Let’s negotiate for an end to this gratuitous dickishness, what can we give you? You dig the dictator thing. How about a giant building with gold toilets and your name on it?”

Colbert whispered in Stewart’s ear that he already has that. When Stewart offered “a whole news network that spends 24 hours a day praising everything you do,” Colbert again reminded him that it exists.

Stewart finally suggested a volcano that would destroy the home state of Barack Obama. Done.

“Clearly, we’re not going to be able to negotiate or shame you into decency,” Stewart lamented. “but there is one place where I draw the line: I won’t allow you and your sycophants to turn your cruelty into virtue.”

“You know, as the great Abraham Lincoln once said, ‘I am the least racist person you’ve ever met. The blacks, they love me,’” added Stewart. “Sorry, that was you.”

He then intoned the correct Lincoln quote: “This and only this: cease to call slavery wrong, and join them in calling it right.”

Concluded Stewart: “It was on this point that Lincoln said the Union could not bend. And what Donald Trump wants is for us to stop calling his cruelty and fear and divisiveness wrong, but to join him in calling it right. And this we cannot do. And I say, by not yielding, we will prevail!”