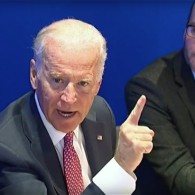 2020. Joe Biden is Democrat Trump fears most. ‘Trump’s calculation is based partly on how weak he sees other Democratic possibilities, including Bernie Sanders or Elizabeth Warren, and partly on who’s capable of appealing to his base of working class whites.’

SEAN SPICER BOOK. Trump’s LGBT support at RNC convention was sham deal to appease anti-Trump delegate: ‘The final name that needed to be scrubbed from the petition, Spicer writes, was that of Washington, D.C., delegate Robert Sinners. The book describes an alleged deal between Sinners, who Spicer says told the Manafort team “he wanted Donald Trump to support gay rights,” and senior Trump communications advisor Jason Miller. “Jason assured Sinners that Trump would be the most ‘inclusive’ candidate the Republican Party ever had,” Spicer writes.’

MEDICAL DISCOVERY OF THE DAY. Cat feces give you confidence: “A mind-controlling parasite found in cat feces may give people the courage they need to become entrepreneurs, researchers reported Tuesday. They found that people who have been infected with the Toxoplasma gondii parasite are more likely to major in business and to have started their own businesses than non-infected people.The parasite, which makes rodents unafraid of cats, may be reducing the fear of failure in people, Stefanie Johnson of the University of Colorado and colleagues said.”

DAVID MIXNER. Legendary LGBT activist won’t be put out to pasture: “The purpose of a movement is not to prove how right you are… but to make it comfortable for others to join you,” Mixner tells young activists now. “And they can’t join you if you’re self-righteous or if you punish them because they came later. So, our job is to … welcome people into our [movement]. To make it an attractive enough place that they want to be part of it. Not to repel [them].”

IDAN DERSHOWITZ. The Secret History of Leviticus: ‘As I argue in an article published in the latest issue of the journal Hebrew Bible and Ancient Israel, there is good evidence that an earlier version of the laws in Leviticus 18 permitted sex between men. In addition to having the prohibition against same-sex relations added to it, the earlier text, I believe, was revised in an attempt to obscure any implication that same-sex relations had once been permissible.

SINGAPORE. Gay activist barred from giving TEDx talk: “Rachel Yeo, the research and advocacy director of the Inter-University LGBT Network, told AFP she had been invited to speak at the TEDx event organised by St Joseph’s Institution last week.”

JACKED. Hugh Jackman heads to the beach for a shirtless run.

DELI DISCUSSION OF THE DAY. Al Roker and Lance Bass.

TEASER OF THE DAY. Peter Dinklage in I Think We’re Alone Now. “Del (Peter Dinklage) is alone in the world. After the human race is wiped out, he lives in his small, empty town, content in his solitude and the utopia he’s methodically created for himself – until he is discovered by Grace (Elle Fanning), an interloper whose history and motives are obscure. Worse yet, she wants to stay.”