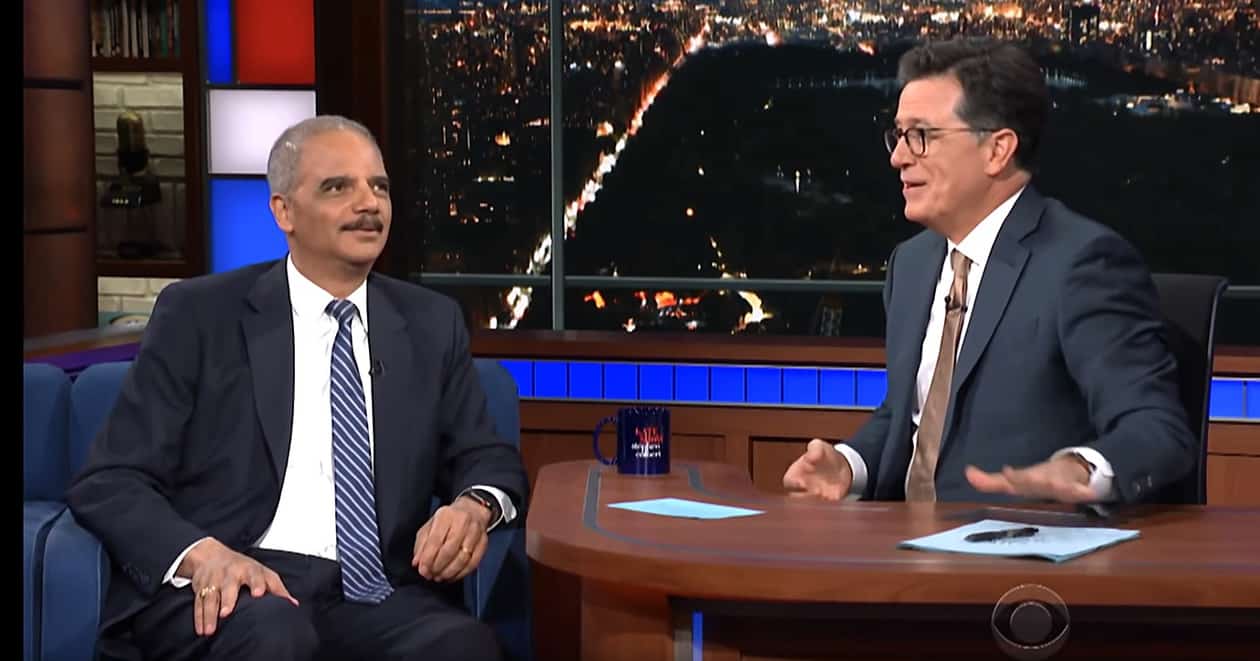 Holder explained the application for Carter Page’s FISA warrant and why it has never happened before. He then asked Holder about this tweet and his statement that the summit was “collusion in plain sight.”

The Trump Presidency will thankfully end, the damage repaired. The United States must then reassume its role as world leader. What we witnessed today was shameful-siding with Putin and not our Intell community/FBI. Then also blaming America. Unbelievable. Collusion in plain sight

Said Holder: “When you have a press conference that the whole world is watching and you have Vlad the Terrible right next to you and you are saying that I am siding with this guy – the bad guy – as opposed to the unanimous opinions, decisions, analysis of the intelligence community of the United States, the nation that you are supposed to lead, you are putting your arms around this person…that from my perspective is not criminal but it is certainly collusion.”

Colbert then asked about Jeff Sessions’ “zero tolerance” policy, and whether the Obama administration separated families.

Replied Holder: “There might have been family separations, but it was not as a matter of policy and to the extent that it did happen there were attempts made by putting these things together called – it didn’t work out too well, called ‘family detention centers’ so that people who were detained could be with their families. What’s different about this policy, is  as you said, the administration said made the determination that they want to use this ‘zero tolerance’ policy, knowing that this would mean the separation of children from people who are charged with misdemeanor crimes and use this as a matter of policy as a way to deter people from coming to the United States. It’s inhumane, it’s cruel, it’s un-American, it’s inconsistent with who we say we are as a nation.”

Asked why he thinks Jeff Sessions has stayed as attorney general, Holder replied: “You have to protect the institution that you are responsible for leading and that ultimately is more important than job retention.”

Colbert then asked Holder about a 2020 presidential run.

Holder replied: “I’m thinking about it and what I’ve said is that I’d make a determination sometime early next year. My focus, really, now is on 2018, the midterms and trying to make sure that Democrats take back the Senate, take back the House, and that we do well, importantly, at the state level. We’re going to be picking half the people right now who will be doing redistricting in 2021. And we have a real problem in this country with regard to partisan gerrymandering. And so I want to make sure we elect as many people at the governor level, at the state level, so that when 2021 comes we have a fair redistricting process.”

Previous Post: « Delaware Becomes 15th State Plus D.C. to Ban Gay Conversion Therapy
Next Post: Seth Meyers Examines Trump’s Obsession with Being Secretly Taped, and Who Finally Got Him: WATCH »