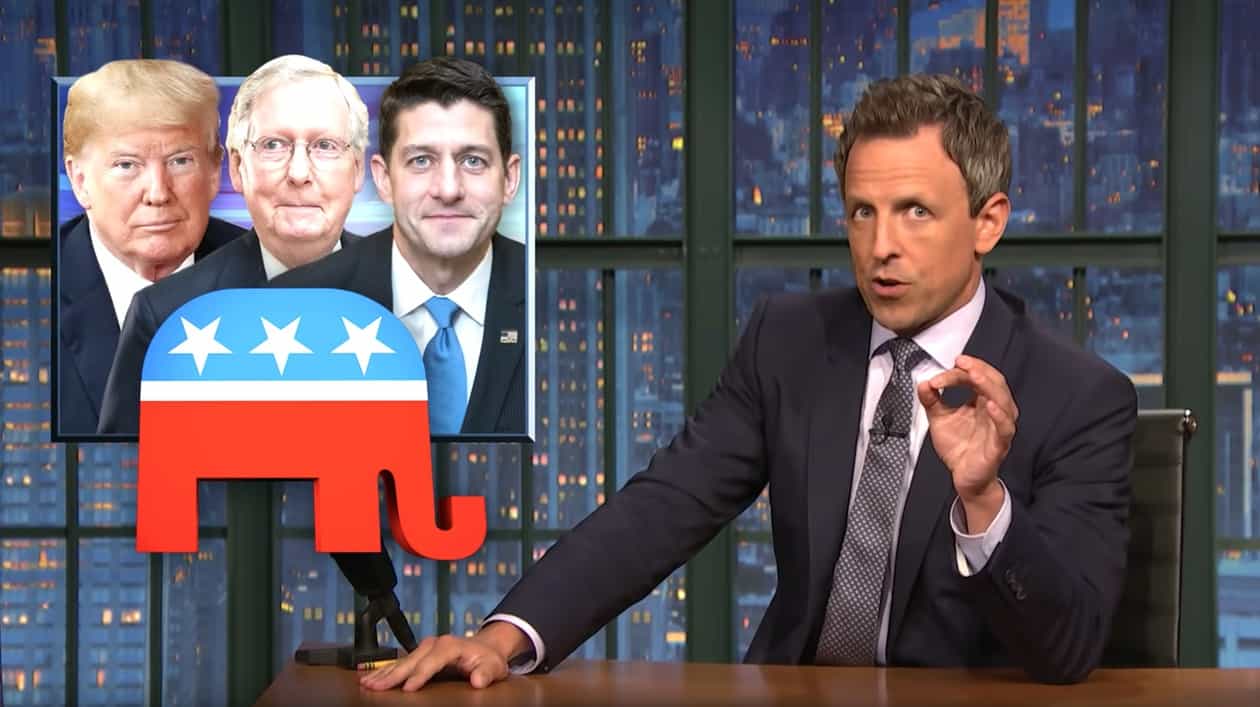 Seth Meyers wondered what a lot of people are wondering in last night’s ‘A Closer Look’ segment: why are Republicans protecting Trump?

Meyers first pointed out Senator Lisa Murkowski, who recently said: “When the president says something that I disagree with, I will state my disagreement, sometimes very directly. I don’t know if you’ve noticed — I’m not really a bomb thrower. I don’t really lay my body in front of the train.”

Replied Meyers: “That is an amazing quote. ‘I don’t know if you’ve noticed, but I would never sacrifice myself for the greater good. I’m not one of those ‘serve the public’ types.’ Also, you don’t have to lay in front of the train. The train’s already off the tracks and headed your way.”

Meyers then pointed out Trump’s ties to Russian oligarchs might explain his affinity for Putin, yet the GOP still pushes back on seeing his tax returns.

For instance, Rep. Tom Reed (R-NY), who claimed that if Hillary had refused to release tax returns, Republicans would have been okay with it.”

Snapped Meyers: “That is insane. If President Hillary Clinton had been accused of colluding with a foreign adversary to undermine an election and refused to release her tax returns, Mitch McConnell would personally dig through her trash and break into her house like Tom Cruise in Mission Impossible.”

And Rep. Thomas Massie (R-KY) said that it was Democrats’ fault they were hacked.

Said Massie: “We should protect our systems. You can’t protect stupid.”

Quipped Meyers: “What do you mean you can’t protect stupid? The Secret Service does it every day!”

Republicans see no need to subpoena Trump’s tax returns or protect our elections even after seeing Trump side with U.S. foe Vladimir Putin over our own intelligence officials, Meyers pointed out.

But one congressman thinks the solution is to make Trump’s tax cuts permanent: “Republicans use tax cuts the way Guy Fieri uses butter.”

Meyers concluded: “One of the keys to understanding what’s happening right now: The GOP establishment and donor class are fine with Trump’s attacks on democracy as long as they can enrich themselves. They’re hostile to democracy because democracy is hostile to their agenda and they think passing another tax cut bill and pleasing their wealthy donors will protect Trump politically. But if there’s one thing we’ve learned this week it’s that (playing Massie clip) ‘you can’t protect stupid.'”