WTF OF THE DAY. Putin names action movie star Steven Seagal Special Envoy to the United States. ‘Seagal’s unpaid and mostly ceremonial position will have him working with US officials on humanitarian issues between the US and Russia, as well as other matters that come up “in the field of culture, arts, science, education, sports, public and youth exchanges,” according to a statement by Russia’s Ministry of Foreign Affairs on Facebook.’

I HAVE ALWAYS BEEN TRANSPARENT. Demi Lovato speaks out after overdose.

KRISTIN DAVIS. Manhattan Madam to testify before Mueller grand jury. ‘Last week an investigator on Mueller’s team questioned Davis about Russian collusion, said the source. Davis declined to comment. Her lawyer could not immediately be reached for comment.’

RAINBOW WAVE. More LGBT candidates running for office than ever before: “Ms. Davids is among more than 400 gay, lesbian, bisexual or transgender candidates running for office this year — a record number, according to groups that track such data. Most are Democrats, and several are mounting anti-Trump congressional bids with a message broader than gay rights. Ms. Davids says she talks mostly about issues like health care and only had one exchange with a voter who questioned whether a gay person could win.” 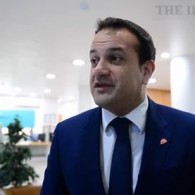 IRELAND. Leo Varadkar says he’ll bring up gay rights with the Pope: “Irish leader Leo Varadkar will bring up same sex marriage to Pope Francis when he meets him in Ireland on August 25th saying that such marriages are the same as any conventional marriage and should be treated as such by the church. Varadkar is Ireland’s first gay leader.”

JEAN-LUC PICARD. Patrick Stewart to reprise legendary Star Trek role in new series. ‘The actor is also set to serve as executive producer on the series, which will air – like Star Trek Discovery – on CBS’ video-on-demand service All Access beginning in the fall of 2019.’

BEN STOKES. British cricketer mocked gay couple before fight, court hears: “A jury of seven men and five women was shown footage which the prosecution said depicted the Durham and England cricket star mocking the couple, Kai Barry and William O’Connor, and flicking the stub of a lit cigarette towards O’Connor’s head.”

ZAMBIA. Two men arrested for gay sex: “The two defendants — Japhet Chataba, 38, a carpenter from Kapiri Mposhi, and Stephen Sambo, 30, a planning officer at Ndola City Council — pleaded not guilty in the case, which has been in process since last October. Both Chataba and Sambo pleaded not guilty to the charge, but did not present any defense witnesses.  The prosecution had five witnesses, including the arresting police officer. Four of the witnesses were eye witnesses, who said they saw Chataba having gay sex with Sambo on Aug. 25, 2017, in Room 16 at a lodge in Kapiri Mposhi.”

HEAT RECORD OF THE DAY. Lisbon, Portugal saw its hottest temperature ever on Saturday, 111.2 degrees Fahrenheit.

Sir Ian McKellen injured himself running to catch a train, and this afternoon’s performance of King Lear is cancelled. Instead, McKellen is chatting with the audience taking questions, and it is pretty incredible. pic.twitter.com/UcNLiWNgE7

TRAILER OF THE DAY. Maniac.

Previous Post: « ‘In & Out,’ ‘Steel Magnolias’ and Everything Else Streaming On Netflix, Hulu, Amazon and HBO in August
Next Post: Paul Manafort’s Business Partner Rick Gates Testifies That They Committed Crimes »