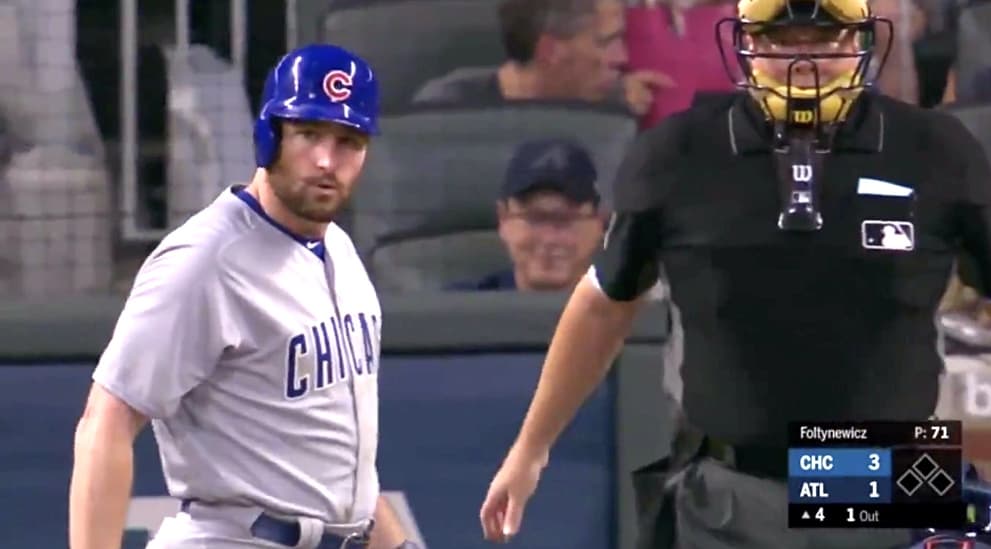 Matthew Kaminski, the organist for the Atlanta Braves, was hailed on Twitter Friday night after trolling anti-gay Cubs second baseman Daniel Murphy with a trio of songs related to LGBTQ topics and equality.

Murphy, who has never changed his view that he “disagrees with the (gay) lifestyle, 100 percent,” was traded to the Cubs last month just five days before “Out at Wrigley,” the franchise’s long-running LGBTQ Pride night.

The songs Kaminski chose each time Murphy came to bat: “Lola” by The Kinks which is about a man’s encounter with a possibly trans woman, “What The World Needs Now is Love” by Hal King and Burt Bacharach, and “Born This Way” by Lady Gaga.

The selections did not go unnoticed.

Here's a montage of songs @bravesorganist played for Daniel Murphy ("Lola" in the 4th, "What the World Needs Now is Love" in the 6th, and "Born This Way" in the 9th): pic.twitter.com/lUpVYpEelM

It’s unclear if Murphy knew he was being trolled, but others clearly did. Kaminski tweeted: “#Braves vs #Cubs – Wow! My Twitter feed was on fire tonight! Thank you for all the love ”

#Braves vs #Cubs – Wow! My Twitter feed was on fire tonight! Thank you for all the love 👍

Murphy, who made the homophobic remarks in 2015 about out former MLB player Billy Bean, was asked to clarify his remarks before his debut with the Cubs, and it was clear that little had changed about his views.

Said Murphy: “What I would say to that is that I’ve been able to foster a really positive relationship with Billy Bean since that time. I’m really excited to continue to cultivate that relationship that we’ve built. Billy, his job I think is Ambassador for Inclusion with Major League Baseball is a vital role so that everyone feels included, not only in our industry in baseball, but in all aspects of life. Again, I hope that anyone that comes to Wrigley Field feels welcome. That’s my hope. That’s the hope of Major League Baseball. And speaking with Billy Bean — again, like I said, the relationship that we’ve been able to forge — that’s what he’s trying to do. I think that’s what we’re trying to do as an industry. We want people to feel welcome, whatever walk of life that might be.”

When asked if he had a message to any fans conflicted with his presence on the team, Murphy responded: “Oh dear. I would hope that you would root for the Cubs.”

Here’s what Murphy had to say to NJ Advance Media in 2015:

“After reading his comments, I appreciate that Daniel spoke his truth. I really do. I was visiting his team, and a reporter asked his opinion about me. He was brave to share his feelings, and it made me want to work harder and be a better example that someday might allow him to view things from my perspective, if only for just a moment.

“I respect him, and I want everyone to know that he was respectful of me. We have baseball in common, and for now, that might be the only thing. But it’s a start.

“The silver lining in his comments are that he would be open to investing in a relationship with a teammate, even if he “disagrees” with the lifestyle. It may not be perfect, but I do see him making an effort to reconcile his religious beliefs with his interpretation of the word lifestyle. It took me 32 years to fully accept my sexual orientation, so it would be hypocritical of me to not be patient with others.”

Bill Gubrud, who created Out at Wrigley in 2001, told Block Club Chicago: I just don’t like the man at all. Honestly, when someone says they don’t like the gay lifestyle, what they’re saying is, ‘I think it’s gross when two guys are having sex together.’ And that’s exactly what Daniel Murphy meant. There weren’t many openly gay sports fans [during the first Gay Day in 2001] because of the fear of retribution, of going to a ballpark and all that … . Stupid comments like that from Daniel Murphy, there’s no place in society for anything like that.”

Wrote Cyd Zeigler at Outsports: ‘I have never advocated for chasing every single Christian person out of sports who “disagrees” with the fact that I’m married to my husband. But when someone decides to publicly elevate the anti-gay environment of the sports world, it’s up to him to fix that. That Murphy hasn’t done that, and that the Cubs would sign him days before Out At Wrigley, is disappointing.’