USA Today reports that the lawsuit was announced by Fox on Friday with his lawyer Gloria Allred: ‘In a choked voice, Fox described what he said O’Neal did to him and the consequences he is still suffering. He said he was minding his own business, dragging a wheeled laundry basket to a nearby laundromat, when he saw a young man approaching dressed in a hoodie and carrying a bottle in a paper bag. Fox said the man snarled, “What are you looking at,” adding a common gay slur. “I was not dressed provocatively. All I did was look up when I saw him approach me.” Fox said the slur the man used amounts to “hate speech” and is “just one of many offensive terms used to make gay men feel ashamed of themselves.”

The paper adds: “He said the man, later identified by police as O’Neal, rushed at him, bashed him on the nose with a beer bottle, then stood over him as he lay on the ground bleeding. He said the man continued to taunt him with slurs, throwing punches and threatening to hit him with the bottle.” 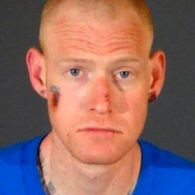 According to The Blast, “O’Neal eventually fled the scene and ended up getting arrested several days later after he allegedly committed several other crimes. He was eventually charged with attempted murder, two counts of assault with a deadly weapon, criminal threats, brandishing a knife and battery.”

Said Fox: “I have spent the last four months recovering from what Redmond O’Neal did to me. I am speaking out today because I need to do what I can to make sure that this man never injures or hurts another defenseless ‘faggot’ ever again. That’s what Mr. O’Neal called me right before he sucker punched me. The word faggot is hate speech and just one of many offensive terms used to make gay men feel ashamed of themselves.”

Allred added: “We contend in our lawsuit that a substantial motivating reason for Redmond O’Neal’s conduct towards Ken was Mr. O’Neal’s perception of Ken’s sexual orientation. There must be serious consequences for anyone who engages in violence against innocent victims and particularly where the victim is victimized on account of his status as a member of a minority which has a long history of persecution and violence against them on account of their sexual orientation.”