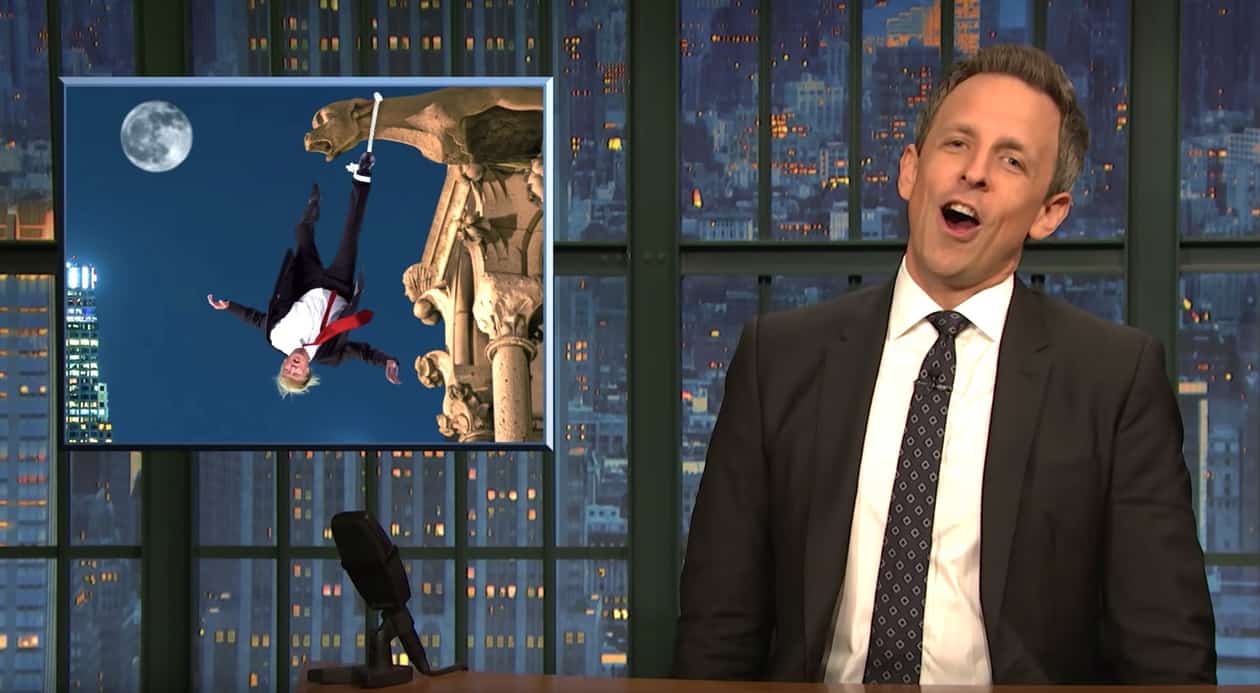 Seth Meyers began his Closer Looks segment with Trump’s plan to outsmart Democratic House members who have promised to investigate him once they take the majority.

“I think I know more than they know,” said Trump to a reporter this week.

No, no you don’t,” replied Meyers. “Trump’s like a Gotham City gangster who thinks he can outsmart Batman — and ends up dangling from a gargoyle.

Added Meyers: “Grifters always think they can outsmart everyone else. And that’s what Trump is. A grifter who surrounds himself with other grifters. Right now, as we speak, Trump is being sued in Federal court for defrauding investors. He just appointed an acting attorney general who advised a firm accused of scamming customers and his candidate for Senate in Florida, the state’s governor, was involved in one of the largest Medicaid frauds in American history.”

Meyers then played a montage of reports on the scams Trump’s candidates have been caught up in: “Trump’s entire career has been built on scamming people.”

Meyers then got into acting attorney general Matthew Whitaker’s job as adviser to World Patent Marketing, a company built to scam customers: “That’s right. The new attorney general of the United States was involved in a scam selling hot tubs. Not only does this administration keep adding grifters, the scams keep getting worse.”

Meyers also looked at the vote recount in Florida, and Trump’s attempts to stop it, claiming on Twitter that the vote had been infected and it should just be called for the Republicans.

Said Meyers: “Hey man, you don’t get to just stop counting the votes because you’re ahead.  Trump’s like a guy who starts a game of HORSE, scores one basket, and says, ‘actually, we were playing H, so I win.'”

“The guys lying about non-existent voter fraud are the ones who committed the actual fraud,” Meyers concluded. “A grifter president put a grifter in charge of the Justice Department and is trying to get another grifter elected to the Senate. But like the grifter he is, Trump always abandons the people who serve him. Whether it’s the attorney general, his own personal fixer, or even someone who’s close to him, like his own ‘Pecker’.”