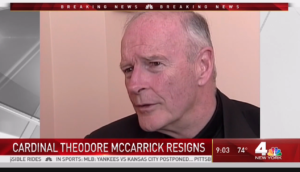 The Vatican heard testimony from James Grein in the case against ex-Cardinal Theodore McCarrick this past Thursday according to the AP.

Grein initially came forward in July after the New York archdiocese announced that a church investigation determined an allegation that McCarrick had groped another teenage altar boy in the 1970s was credible.

Grein’s claims, first reported by the New York Times, are more serious. He has alleged that McCarrick first exposed himself to Grein when he was 11 and then sexually molested him for years thereafter.

Grein testified that McCarrick  —  a close family friend who baptized Grein — would take him upstairs to hear his confession before celebrating Mass for the family at home.

“He touched James’ genitals as part of the confessional. That became the course, it happened almost every time,”Grein’s lawyer Patrick Noaker said. McCarrick would absolve Grein and “touch him on the forehead, shoulder, chest and genitals.”

Noaker said combining sexual abuse with a sacrament like confession haunts Grein to this day.

The report goes on:

The Vatican is under pressure to finalize its case against McCarrick before Francis hosts church leaders at a February sex abuse prevention summit, since Francis himself has been implicated in the yearslong cover-up of McCarrick’s misconduct with adults.

If convicted by the Vatican, Francis could defrock McCarrick or give him a lesser penalty.

While victims have long complained about the way they have been treated during canonical proceedings, Noaker praised the judicial vicar, the Rev. Richard Welch, saying he was compassionate, respectful and patient during Grein’s testimony.

Overall it’s encouraging to see that the Vatican and Catholic church in the United States are taking steps to correct their past lack of urgency in addressing the scope of the incidents of sexual abuse and assault. They are acting tactfully towards victims and acknowledging they have been complicit in covering them up.

Previous Post: « Adam Rippon’s Resolution is For More BDE in 2019 and We’re Here For It
Next Post: #MCM Muscle Hotties Strip and Offer Gay Bro-Tips to Picking Up: WATCH »