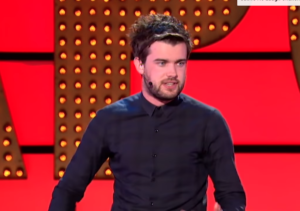 According to an exclusive on TMZ a test screening of the film Jungle Cruise that took place last week    avoids using the word “gay” when Jack Whitehall’s character, McGregor, comes out to Dwayne “The Rock” Johnson. “We’re told, at one point, McGregor has a heart-to-heart with The Rock’s lead character, Frank, about dating history … and McGregor makes it very clear he isn’t into ladies. Keep in mind, this flick isn’t set in modern times.”

Disney already facing backlash about casting Whitehall (who is straight) as opposed to an LGBT actor will certainly be pilloried.  TMZ said, “We’re told the scene was well-received by the audience, but the glaring omission of a pronoun to describe McGregor’s love interest did not go unnoticed.  Unclear if the scene will make the final cut — but ya gotta imagine it will, given how significant a move it is for Disney to include a gay character in an action blockbuster.”

The film will be released world-wide in 2020.