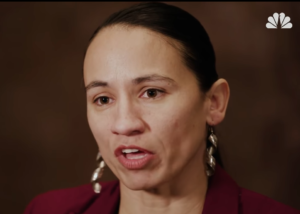 Representative-elect Sharice Davids, a gay Native American, said she is ready to “shape the future” of America in an appearance on NBC News.

Davids quickly emerged as one the most visible faces of the “Rainbow Wave” that ushered in a an unprecedented number of LGBTQ elected officials into office last month. Upon winning Davids became the first openly LGBTQ Kansan to serve in congress.

“We stood up and said that our country isn’t the fear and the hate and the rhetoric that some of our currently leaders would have you believe,” Davids said this month at the Victory Institute’s annual International LGBTQ Leaders Conference in Washington — to a room of LGBTQ elected officials and community leaders. “We stood up and said that we welcome everyone, and that everyone deserves a shot to succeed.”

Davids concluded by saying, “I know that together we can and will help shape the future of this country for the better.”

“Having such a diverse group of people coming into Congress is going to make a difference, because no matter if your experience is very similar to mine or completely different than mine, it’s just as real and it’s just as valid,” Davids said. “Your voice deserves to be heard just as much as mine and just as much as the people who have been in decision-making positions for so long.”