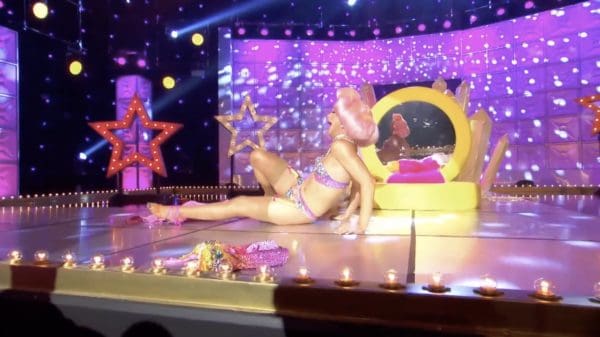 Before she was television pioneer and beloved talk show host, Ellen DeGeneres was an accomplished stand-up. Watch her routine to her roots with a new special, Relatable, available on Netflix.

There are so many reasons why you should be watching Schitt’s Creek. First, there’s the consistently brilliant comedic actress Catherine O’Hara doing some of the best work of her career as Moira Rose. Then there’s the adorable star and co-creator Dan Levy, whose character David is pansexual. Of course, the best reason to tune in is because it’s one of the most uniquely hilarious shows on television. Catch the special holiday episode Wednesday at 10 p.m. Eastern on Pop.

The “OGs” of The Real Housewives all come together for a night that’s definitely not a sign of the apocalypse, Thursday at 11 p.m. Eastern on Bravo. Teresa Giudice, Kyle Richards, Bethenny Frankel, Ramona Singer, Vicki Gunvalson, Nene Leakes, Famine, Pestilence, War and Death join Andy Cohen in the Watch What Happens Live clubhouse.

Marvel’s TV teen heroes return with a second season of Runaways dropping on Hulu Friday. The series follows a ragtag bunch of superpowered teens that learn their parents are part of an evil conspiracy. Among the teens are bisexual witch Niko and lesbian space alien Karolena. Unlike previous Hulu originals, all episodes of the new season will be released in one bingeable chunk.

Wahhhhh … will Farrah Moan cry and pout her way through another episode? Or will this week’s girl group-themed episode of RuPaul’s Drag Race All Stars be her undoing? Find out Friday at 8 p.m. Eastern on VH1. Catch up with our recap here, and see an extended clip of last week’s reading mini-challenge above.