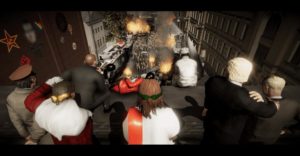 In a particularly ghoulish alt-right video game released in time for the New Year called Jesus Strikes Back, you can take on the point of view of characters ranging from Hitler to Jesus, to Donald Trump, Benito Mussolini, and Vladimir Putin (or a very close likeness).

Your mission, should you choose to accept it, is to kill LGBTQ people, feminists, “radical social justice warriors,” and a “radical, frenzied NON-BINARY, GENDER FLUID pansexual humanoid berserker.”

You know, your friends.

Yes while normal gamers are getting addicted to Fortnite this holiday season your rabid Republican cousins can crawl out of the Catskill holes they’ve dug themselves into — hope to catch a WiFi tower masquerading as an ever green — and kill all the queers they want.

There’s an antidote to the hate of Jesus though: a funny alternative fighting game where you can play as Jesus and battle other gods like Buddha and Anubis called Fight of The Gods.

Although it was totally overshadowed by the recent release of Smash Bros it’s still good heathen non-hating fun.

Watch the trailer for Fight of The Gods below:

Previous Post: « A ‘Queer As Folk’ For The Future?
Next Post: Peach Takes Huge Eggplant In The Name Of Prevention WATCH »