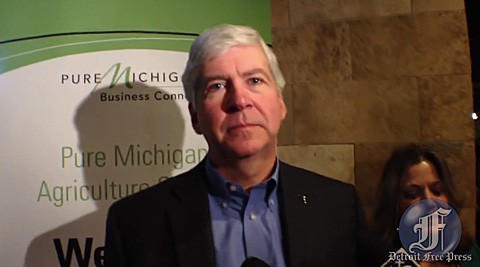 Michigan‘s Republican governor Rick Snyder signed a surprise executive directive with less than a week left in his term that bans anti-LGBT discrimination by state contractors.

The Detroit News reports: ‘Snyder signed the directive Thursday and announced it Friday with just four days left in his tenure, describing it as an effort to lead by example in government. The directive requires state departments and agencies to include language in new contracts prohibiting contractors from hiring or firing on the basis of sexual orientation, gender identity or expression. It includes an exemption for nonprofit religious organizations, including churches.’

Wrote Snyder, who was repeatedly blocked by conservatives in his own party in getting protections for LGBT people written into the state’s anti-discrimination law: “Michigan’s continued reinvention and economic growth depend on talented individuals choosing to live and work here. It is essential for State government to be a leader in welcoming all people to our state and ensuring that everyone is treated fairly and with respect . The State of Michigan must be open for business to all. It is critically important to this Administration that State government maintains its leadership position in encouraging robust and inclusive economic growth. State government is one of the largest buyers of goods and services in Michigan, and therefore it is uniquely positioned to be a leader in ensuring fair treatment for people in employment. In fact, it already has been a leader. With respect to State employees, the Civil Service Commission adopted Civil Service Rule 1-8.1 prohibiting discrimination based on sexual orientation for State departments and agencies subject to Civil Service Rules. For Michigan to be a leader in inclusive economic development, all State of Michigan departments and agencies that perform procurement functions and provide loans and grants to local units of government and private entities must work together to ensure State government is open to everyone.”