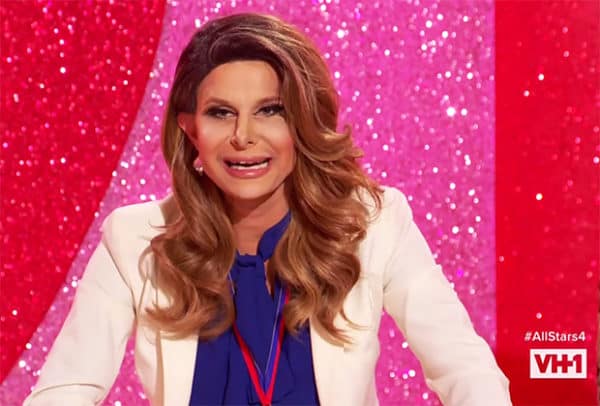 They say if it ain’t broke, don’t fix it, but in the world of reality TV, people just can’t help fussing.

This isn’t the first time they tested a new formula. (All Stars season one instead opted for RuPaul’s Gafff-In for its celeb-centered challenge.) Last night’s Snatch Game of Love split the queens into two groups vying for the affections of the stars. It’s not a natural fit for the format. (Match Game is designed for both celebrities and the sort of zingers Ru’s looking for.) On the other hand, splitting the gals in two groups of four gave them each a little more room to breathe.

Fresh off Farrah’s elimination, the gals sat together for the I guess weekly segment where last week’s winner tells all the girls how hard it is to eliminate one of the other queens. We get it, gurl! You want to be likable! But Dela done did it, and now we’re all here for blood, okrr?

Luckily, things picked up pretty quickly when Trinity (rightly) comes for Monet’s simple fashions. It was just a few sparks that flew, but at least it’s something.

Ru announced this week’s challenge is Snatch Game of Love, and the queens rejoiced. Trinity found herself in another spot of drama when both she and Gia announced they’re planning on sending up Caitlyn Jenner during the game. The queens gathered round as both Gia and Trin make their case as to why they’re better prepared. Ultimately, Trinity has a better Caitlyn, so Gia decides to go with Cardi B … ‘s nail tech, Jenny Bui. Ok. Sure.

The game itself was structured in two rounds. In the first, Monet (as Whitney Houston), Naomi (Wendy Williams), Trinity (Caitlyn Jenner) and Valentina (Eartha Kitt) compete for a date with out Olympic skier and Instagram thirst trap Gus Kenworthy. We’ll go into individual performances in our rankings, but Monet and Valentina struggled to land any jokes, despite the former’s dominance in the season ten Snatch Game and the latter’s thorough Eartha Kitt research. Naomi’s Wendy was likable, but Trinity’s Caitlyn Jenner was the obvious star.

The second group battled it out for a date with adorable Love, Simon star Keiynan Lonsdale. Monique (as Tiffany Haddish), Manila (Barbra Streisand) and Latrice (Della Reese) did their best to compete with Gia’s Jenny Bui “performance,” which could only be described as “romper room f*ckery.” Latrice was the most visibly furious with Gia’s non-sequiturs and interruptions, but even Manila was caught on camera flatly telling Gia to shut up. It was a mess.

Gia’s place in the bottom felt like a sure thing, but her departure was not guaranteed. As everyone readied for this week’s “boots the house down” runway, Manila floated the idea that maybe now was a chance to knock out a real threat in lieu of sending the worst performer packing. Yass, drama! Yass, controversy! Yas!

The runway was a total gas. All the lewks slayed, including the ones the judges didn’t totally love. Manila turned out an iconic lewk as a bondage bunny with exceptional attention to detail, down to the bandana pattern on the ears and carrot ball gag. They spared Monet and Monique, leaving Manila, Naomi and Trinity in the top and Latrice, Valentina and Gia in the bottom. Ultimately, it was down to Trinity and Manila to lip sync in order to eliminate either Gia or Valentina.

Then things got real interesting. Before the one-on-ones, winners Trinity and Manila pow-wowed alone. Again, Manila floated the idea of eliminating Valentina.

Trinity immediately told her buddy Valentina this little development. She also promised to win the lip sync on behalf of Valentina and to send Gia home. Manila, to her credit, was very up front with Valentina about the potential of sending her home, but she offered Valentina a little deal: If she saves her now, Valentina should save her if the roles are ever reversed. Valentina, to HER credit, fielded this flawlessly. She told Manila that, first, she would never ask that of her, and, second, if she wants to win, get out there and win, gurl.

The lip sync was another mid-tempo number, this time to Whitney Houston’s “How Will I Know?” (Hey, Ru, can we get some bangers in here? I want to see some splits, some death drops, some real Mortal Kombat stuff.) Manila and Trinity served some good faceography, but no real memorable, meme-able moments. Manila got the win (though we suspect some producer influence here; Trinity outshined her in our eyes).

In a tense moment, Manila revealed she chose Gia to go home. But has the mere suggestion changed the nature of the game? We’ll see!

Now, where does that leave the rest of our gals? Check out our rankings below, and leave yours in the comments.

1. Although this crop of queens still feels very neck-and-neck, there’s no doubt Trinity is starting to pull away from the pack. She has come to play, honey. Her lewks are on-point, she approaches every challenge strategically and she’s playing a smart, but fair political game behind the scenes. Her Snatch Game was truly one of the series’ best; a fully-realized performance that effortlessly weaved jokes throughout the game. (Also, very grateful she wisely avoided poking fun at Jenner’s transition or gender identity.) Her blonde bombshell boots the house down ensemble was sparkling, shining, S&M couture.

2. Yes, Latrice had to work against Gia during Snatch Game. But, I’m not convinced she had a lot to offer as Della Reese. I get she was flustered, but where were the jokes? What was the character? Even the wig didn’t feel 100 percent right. Latrice is still a strong contender for the crown, but if she doesn’t turn up the gas soon, she’s going to get left in the dust.

3. This season’s most surprising Snatch? Naomi Smalls. Having whiffed her season’s Snatch Game, expectations were low for the leggy fashion queen, but she came correct. She knew the basic catchphrases to pepper into conversation, she kept the jokes relevant to the questions at hand and she planned the right number of stunts to make memorable moments. If not the most laugh-out-loud funny, it was certainly one of the most carefully considered Snatch Game performances in herstory.

4. Maybe it’s me, but I wasn’t impressed by Manila‘s Barbra. It felt like the lowest hanging fruit. (And definitely not not a little anti-Semitic) It didn’t feel subversive or particularly specific at all. Compared to Trinity, Naomi and even Monique, it didn’t seem like Manila wielded the wide array of potential Streisand riffs with nearly the same level of skill. Her runway did deliver, but, again, I wouldn’t put it above some of the other glamour (Trinity, Latrice and Naomi all outshined her on the mainstage). Her awkward alliance crafting and strategy shenanigans were also a big turnoff for me.

5. Valentina did not deserve to be in the bottom this week. Her Snatch was lacking, for sure. It felt like she was reciting Eartha Kitt’s Wikipedia page. Michelle clocked her runway perfectly, but the fit of the garment is a small gripe when the color, hair and makeup were all so on-point. Even if it’s saggy, put Valentina’s WORST outfit next to Monet’s BEST, and it’s still no contest. More than anything, how Valentina handled Manila’s plotting was some real next-level, reality-TV expertise, mama.

6. I wanted to love Monique’s Little Red Riding Hood runway so much more than I did. The hooded cape reveal and the wolf boots were inspired, but the rest of the look lacked a strong point of view. I get that she was trying to give us emphasis on the HOOD with a bit of banji flavor (the shorts and hoop earrings), but it just didn’t feel like it went far enough. The top and shorts looked straight off the Forever 21 rack. Tiffany Haddish — or any other comedian — is a tough sell for Snatch, since they’re already funny. That said, Monique did a serviceable job playing the game in character.

7. I can’t figure out how Monet didn’t land in the bottom this week. For a comedy queen to bomb Snatch Game like that, the judges should have read her on the runway. I didn’t love the boots either. They fit strangely over the patent leather pump and the exposed lining at the top felt a little cheap. The hair and makeup were cute, though! I love me some Monet, but I do think her days are numbered.

8. Yikes. Gia made that Snatch Game painful to watch. Some might say she was at a disadvantage, because she was forced to go with her backup. However, imagine how rough her Caitlyn Jenner would have been? Gia needs to pick someone so big and broad that the funny smacks you in the face. She can’t craft a character herself. She could’ve given us Paris Hilton, Melania Trump, Ariana Grande … someone with a real paint-by-numbers impression that would have landed her somewhere safe. Instead, we got this mess. And if it was this hard for us to watch in the edit, I can only imagine how insufferable it was in real time. Gia is a beauty, no doubt, but she still just doesn’t have the comedic/showbiz chops this competition demands.