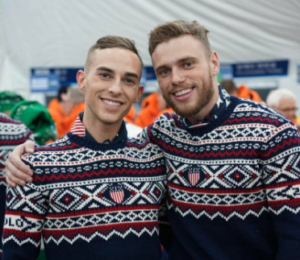 2018 has been a year of incredible firsts for the LGBTQ community including the first openly gay Winter Olympic medal winners Gus Kentworthy and Adam Rippon. Yance Ford is the first transgender man to be nominated for an academy award. Jared Polis became the first gay governor of any state in the union, and Beth Ford—the CEO of Land O’ Lakes—is the first openly gay woman to run a Fortune 500 company.

It’s satisfying to see queer people fill the decision making roles that affect all our lives, but as I think of a future when firsts become increasingly rare, I can’t help but contemplate: what happens when we run out of firsts, and why it’s important to have LGBTQ people in positions of power at all? Many would argue that it’s “queer ideas” that as a community, are our most valuable contribution to society, because we bring a perspective born from lived experience that’s an alternative to logical systems hemmed in by what Eve Kosofsky Sedgwick called the gender “binary.” But what is a “queer idea?”

Alan Turing had one. While trying to answer a philosophical question about the operations of human cognition and memory he conceptualized the idea of a computing machine (a technology he had to invent to test his theory) in his monumentally influential paper: “Computing Machines and Intelligence” (1950). Turing was courageously open about his sexuality to the people important to him, and it often informed his theoretical work. He wrote this play on formal logic and self deprecating humor to a gay friend of his in 1952:

Biographer Dr. Andrew Hodges describes Turing as always being “apart” from the crowd in a state of being that “alienated him from conventional structures of thinking.” For Turing, it was his queer idea that was a first, and it would be paradoxical to say “he was the first openly gay man to invent computers,” because of course there can be only one. Turing’s story should remind us that while it is important to celebrate the visibility of influential queer bodies, we need to take equal if not more pride in the queer mind and its alternative creative potential. Ultimately Turing’s idea did not spare him from being prosecuted and chemically treated for being gay, a punishment that led him to commit suicide by taking a single bite of a cyanide laced apple. There are some that think the Apple company logo is a touching tribute to Turing, but for me it’s also an incredibly profound symbol of the unifying power of world changing queer ideas—the only thing we have left after we run out of firsts. 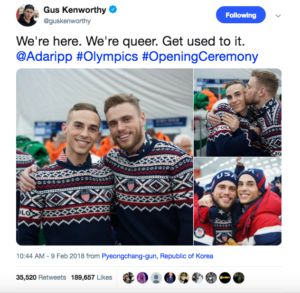 Gus Kenworthy’s tweet from the Olympics earlier this year.

Published writer, gold medal winning calligrapher, and accomplished polyglot, Lucas Justinien Perez’s passion is for words. His linguistic journey began as a child in Mexico, took him through 28 countries (living in Japan for six), and enabled him to study ancient Chinese calligraphy in Taipei — Japanese Nihonga painting in Tokyo  —  and contemporary art & critical theory in New York City. Lucas lives with his boyfriend Steven Tran in his home in San Diego, California but spends his time working bi-coastally.

To find out more about Lucas, please visit lucasperez.org

Previous Post: « ‘When Brooklyn Was Queer’ Uncovers A Hidden History
Next Post: Darren Criss Explains Why He Won’t Be Playing Any More Gay Characters »