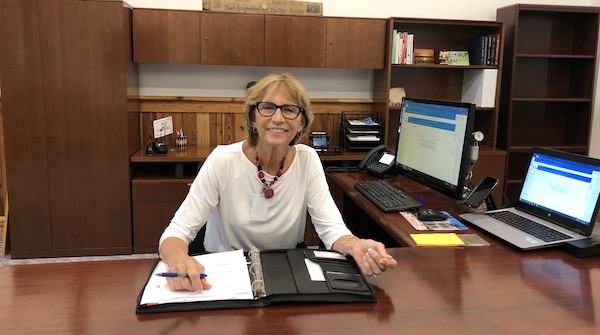 Key West proudly touts itself a place that’s “close to perfect, far from normal.” It’s an ethos that extends from the city’s historic streets all the way up to City Hall where Key West’s openly-gay mayor is proudly defying the politics as usual plaguing the rest of the country.

A place as special as Key West requires a special kind of leadership. Mayor Teri Johnston, took office in November after a campaign free from the vitriol and partisan attacks that have come to define contemporary politics. Instead, Johnston ran a campaign focusing on the issues that affect Key West most: balancing the needs of tourists and residents, protecting the area’s unique ecology and cleaning up iconic Duval Street.

There are few people better suited for the job than Johnston. A passionate advocate for the city she loves so much, Johnston isn’t afraid to wade deep into the issues affecting the community. Her political career began as a founding member of Fair Insurance Rates in Monroe (F.I.R.M.), a group that fought for lower insurance rates from the state-run Citizens Property Insurance. After working tirelessly on demonstrations and advocacy, the group stopped a scheduled 28 percent rate increase and rolled back rates 34 percent.

In 2007, she successfully ran for City Commissioner, serving until 2015. She spent the following few years working on the Monroe County Planning Board, racking up valuable experience that will no doubt serve her well as she charges forward with bold solutions for affordable housing, pedestrian malls and easing traffic and congestion. Her win in the 2018 mayoral race made her the first openly gay woman elected mayor of a major city in Florida history.

On a recent visit to Key West, we spoke with Mayor Johnston about her experience as an out gay politician, what made her fall in love with Key West and what visitors should be sure to see.

See what she had to say in our interview, below. 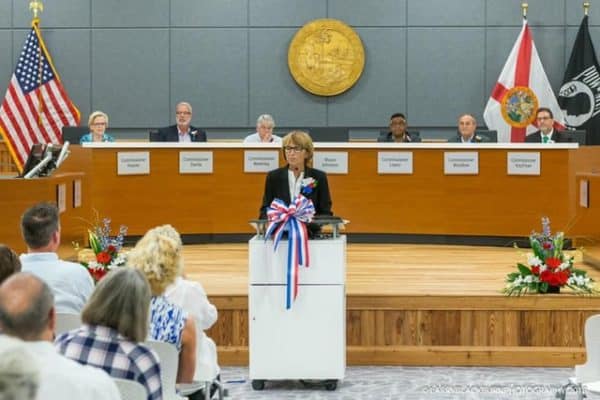 Towleroad: What brought you to the island originally?

Mayor Johnston: Actually, the weather. We had been up in Illinois for years and years and years. We owned a construction company. We were out in the elements 12 months out of the year, because now they have concrete additives that allow to build, even if it’s 40 below zero — and it was many times. We were vacationing, and we thought we were going to try Florida, and then we’re going to try California. We’re going to try some different areas, because we knew ultimately we wanted to get warm. So, we came down to Key West the first time in an RV … We came down the first time for three months. Then we were going to go to California the next year, but we thought, no, let’s just try Key West again. What drew us initially was the weather. What kept us here was the people and the environment and the feel of Key West, because it’s like no other [place] you’ve ever been.

I’ll just give you an example. Have you been to La Te Da?

MJ: I was sitting at the bar, and my partner was talking to another friend in the bar. I had this wonderful conversation about an hour long. We had a couple of glasses of wine, and there was a gentleman to my right and a gentleman to my left, and we were talking national politics and the economy, just a myriad of topics. I got up to leave, and the bartender came over and said “I bet you didn’t realize the gentleman to your right is a billionaire and the gentleman to your left is homeless.” I just thought this is the place I want to be.

TR: Now, your sexuality wasn’t really a factor in the campaign.

MJ: You know, I was gay when I was a City Commissioner. It’s interesting in Key West, because I hear a lot of gay people say, “Well, [Key West] isn’t gay anymore.” Gay is everywhere! We’re residents of Key West, and Key West has a mentality — I guess the easiest term is “inclusive” — but you don’t care. Just be a good person, contribute to the community, help your neighbor and that’s what we’re looking for, not necessarily what your sexuality is, what your political beliefs are, what religion you subscribe to. It’s just ‘be a good person’.

TR: I’m curious how you feel your experience as a member of the LGBTQ community affects your approach or perspective.

MJ: I think it gives you a sensitivity to discrimination and to rights. What impacted my partner and I most, and we are married now, but rights of survivorship, rights that most people enjoy without a second thought. It’s a real sensitivity to me that everyone is treated equally in all aspects of our community.

TR: What do you hope seeing an out person in office tells a young person who lives here or is visiting? What message do you hope that sends? 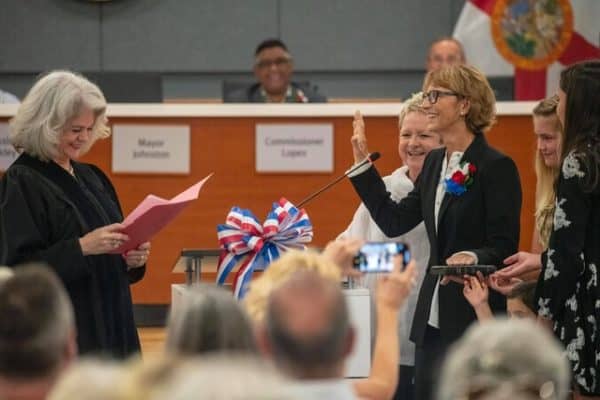 TR: What’s surprised you most about your political experience in Key West so far?

TR: What are your must-see attractions when you have visitors to Key West?

MJ: Here’s the first thing you have to do, because we have so much. You have to get on the Conch Train, either the train or the trolley. That takes you through Key West and shows you everything you want to get back to. We have the second largest wood frame historical district in the United States. You’ve got to see that, because we spent a lot of time and money and angst over making sure we maintain those. This building you’re in right now [City Hall] used to be an 82-year-old school, and we saved that and turned it into City Hall. We’ve got a lot of historic buildings, the Customs House, obviously Hemingway House. There are just mainstays you’ve got to see. I would walk through the historic district. You can actually access it via an app, or there are plaques on each one of the historic homes that gives a little background as to their historic significance.

One of the things we have the most potential in is cultural arts. We’re well known for our nightlife, and that’s always going to sustain. We have so much more to offer in the cultural arts area to bring a different group of people down.

The water. You gotta get out on the water. You gotta go flats fishing. You got to take a sunset cruise. We have a unique Mallory Square sunset celebration where we have entertainers from all walks of life down there performing free. We have a new amphitheater right now. If you talk to performers that actually performed there, they say they’ve never seen anything like that because it looks out onto the water. The music goes out on the water, and while people are enjoying their performances, they’re enjoying just looking out and enjoying the atmosphere of Key West.

TR: Where is your “happy place” in Key West?

MJ: It’s really home with Dar and our two dogs and cat. My happy place is almost everywhere I go, it really is. There are good, good people in every aspect, whether it’s a restaurant or the beach or at a softball game or a Conchs football game or at a concert. It’s all happy. When we were back in Illinois, when winter hit, we were in by five o’clock. It was dark by five o’clock, it was dreary. It was too cold to go out. When we got down here what struck us was people were just getting out of their house at eleven o’clock to go eat. The streets were filled with people walking quietly, talking, stopping on someone’s front porch, having a glass of wine. It was an entirely different environment. You were alive when you come to Key West 12 months out of the year.

The other thing that is so unique about here is we do get hit with hurricanes. But that’s what brings out the best in our community. We don’t have looting, we have pick-ups full of high school kids stopping and saying “Can I help you move your furniture out? What can I do to help?” It’s a community like not many others.

TR: With the caveat that Key West has a great food scene, but if you had to pick a favorite dish or two, what would they be?

MJ: The fish. There are so many wonderful fish spots, but you need to try to the fish when you get to Key West, you really do. Boy, it’s so hard, because we have so many little neighborhood restaurants that are so good. And they are so unique. We have great fish, there’s great steakhouses, there’s Antonia’s, there’s La Te Da, there’s Seven Fishes. There is anything you could ever want. There’s small plates from Santiago’s Bodega and 915. There’s steakhouses like 591 and Spencer’s. There’s everything. There’s sushi!

TR: What is one thing you want to see changed in Key West?

MJ: I’d like to make sure we keep out the hatred and divisiveness that’s permeated the country. We have a very special spot here. I often say if I could put a dome over it, I would. Every once in a while you’ll have a visitor here that just doesn’t fit, just doesn’t get Key West. I would like to make sure that we are maintaining this community for our children, for the future, for everybody that wants to come to the most inclusive community in the United States … We have work to do, but the work we have to do is little, manageable stuff. And I don’t mean it’s not going to be difficult, because traffic, housing, the economy, making sure the economy stays strong — all those things are going to be difficult, but other communities have done it. The other thing I’d like to see us change is I’d like to see us take a more active role in managing climate change. We are low, we are going to be one of the first areas impacted, we got to make sure we have a plan. What my objective is is to make sure we’re interacting with people who have done this for years. The Netherlands, communities that have lived with water and managed water, because there are ways to do it and we can do it too.

Previous Post: « Why Is Google Dragging Its Feet In Eliminating Its ‘Boy Erased’ App?
Next Post: Meth’s Resurgence Spotlights Lack Of Meds To Combat The Addiction »