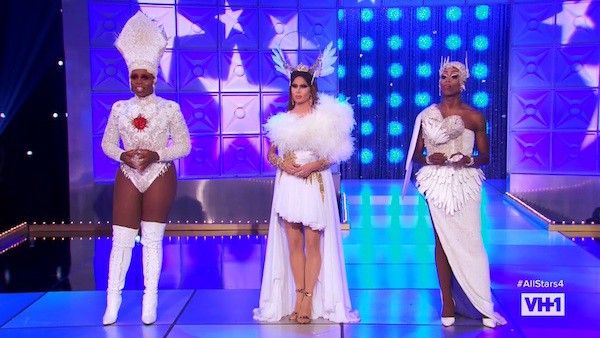 They say comedy equals tragedy plus time, so the good news is eventually some of last night’s tragically poor performances will get more funny.

As it were, though, the majority of our remaining queens struggled to wring laughs from the dearly departed Lady Bunny as they delivered a Ru … ology? Ru … loogey .. Ru-who-logy! to Ru’s best friend. It’s a dark spin on the typical roast challenge, and (the still very much alive) Lady Bunny would be laying in state in a casket on stage.

The queens all needed a laugh after last week’s shocking elimination. Manila really uses the space for her grief, wandering around the workroom sobbing like she’s Catherine on the moors in Wuthering Heights.

Manila’s desire to save her friend alienated her from the rest of the group. Monet vowed to send Manila home if given the chance.

Once all the queens got to work, Manila and Monet seemed to really take off, while everyone else struggles. Ru’s visit only made the weak links more apparent. Valentina and Trinity both whiffed their roast during their season, and that failure hangs heavy over both their heads. Trinity appeared to channel that anxiety into overthinking her material, while Valentina came off utterly lost.

The queens weren’t alone. Each queen gets some time with SNL comedy KWEEN Cecily Strong. Ironically, the stronger queens got much more value out of their time with Strong. Maybe it was because they had actual material to workshop, but Valentina, Trinity and Naomi all seemed to leave the session the same or worse than they arrived.

When the time comes for the roast itself, the only surprises were the under-performers failing to meet already low expectations. Monet slays the opening, as expected (Sample joke: “We are here to celebrate the life, legacy and illiteracy of Lady Bunny”). Trinity gurgled out a string of statements that are maybe 60 percent of the way to being an actual joke. Monique delivered a Southern-style preacher character, but her one-note jokes all blended together into one sort-of-funny din. Naomi attempted a millennial spin on her weak, old-age jokes, but it felt like nothing hit. I don’t even know how to describe what Valentina did, but I will say it straddled the line between utter, abject failure and almost Kaufman-esque comedic brilliance. People were laughing, yes, just not how she likely intended. Lastly, Manila closed the show stupendously, from her memorable entrance (she brought a big, black umbrella/veil prop from which she peeked and then recoiled at the sight of Bunny) to her opening line (“Dearly beloved … AND MICHELLE VISAGE!”), Manila delivered a thoroughly professional performance.

The runway called for the queens to show up in their Angelic Whites, and everyone delivered. (More detailed takes in our rankings, below.) Monet in particular was this week’s standout, storming the runway in a beaded ensemble with dramatic train, papal headpiece and bright red, glowing eyes. It was a showstopper.

Manila and Monet were rightfully chosen as the top two, which left everyone else vulnerable to elimination. Backstage, it became quickly apparent that the queens’ report cards aren’t an easy, objective barometer to pick the weakest competitor. It’s not like each queen is awarded actual, quantifiable points. Does winning a challenge outweigh never being in the bottom? What about lip sync wins? The four bottoms’ records all sort of even out.

Monet and Manila performed one of Drag Race‘s most joyous lip syncs to Aretha Franklin’s underrated bop, “Jump To It.” It was a collaborative, campy, comedic number, and it’s a joy to watch.

Ru (again, rightfully) names both queens winner, splitting the cash tip $5,000 a piece. There’s a momentary panic that two queens would be sent home, but Ru eased everyone’s mind by instead no one was sent home. Instead, she ominously warns that All Stars rules are suspended.

Back in the workroom, a cryptic message from Ru heralded the return of the Lip Sync For Your Life, and a surprise appearance from Lady Bunny reintroduced the — *gasps in faux shock* — return of the eliminated queens.

What happens next? I guess we’ll find out next week!

We should probably stop pretending the return of the eliminated queens is even a shocker anymore. We all know it’s coming. I wonder if future seasons of All Stars would be better served by some kind of “Redemption Island” or “Last Chance Kitchen” style mechanic transparently built into the game from the jump.

Until then, let’s assess the remaining queens’ current standings. This season continues to be an incredibly tight race, and I could see a valid argument for almost any order of success. We’re splitting hairs, but we’ve put together our rankings for which queens seem the most likely to earn that spot in the hall of fame below. Disagree? Leave yours in the comments.

1. Ross said it best: Now is a good time to build momentum, and Manila Luzon is doing just that. This was another incredibly strong performance from her in the challenge. While Monet may have had more jokes, Manila’s gags felt more varied and overall more successful. She had physical humor, reads, wordplay and her delivery was spot on. I wasn’t as crazy for her runway as the judges were (the cherubs felt cheap), but her hair and makeup were gorgeous.

2. Under normal circumstances, Monique would have likely been safe this week. Out of the bottom four, she was easily the best of the bunch, and I was gaga for that headpiece. Monique does very dramatic, severe makeup which in this instance made sure her face was just as impactful as the elaborate headpiece on the runway. More than almost any other competitor (Monet may be the exception), Monique has demonstrated impressive growth in the short time between her season and now. That makes her a winner, regardless.

3. As some readers have noted, I’ve been a bit hard on Monet the last few weeks. I’ve been waiting for Monet to give us a MOMENT, and tonight was just that. Yes, she deftly handled the opening slot of the roast with her signature stand-up delivery, but it was that jaw-dropping runway lewk that really sealed the deal. That’s how you do an All Stars runway, honey. I was gagged, gooped, slimed, dead. I stan. I’ve gone from Monet skeptic to Monet cheerleader, and I hope this week’s performance gives her the confidence boost to fight for a spot at the end.

4. Did Trinity always have that shrieking opossum laugh? I don’t recall hearing it in her season, but now I’m hearing it in my sleep. Again, not to just copy-paste Ross’ comments, but I also am on the edge of my seat ahead of her runway appearances. With her Snatch Game win under her belt and the roast challenge behind us, hopefully Trin’s biggest challenges are behind her. She may have roasted slightly less credibly than Naomi, but they were both rough. While Naomi had solid jokes conceptually that just weren’t funny, Trinity struggled to craft material that even followed its own logic. Her stunning runway likely would have spared her from a bottom two position under normal circumstances, but she had reason to be nervous.

5. Ouch, Naomi, that looked rough. It’s one thing to bomb when you know you’re unprepared or out of your element, but there’s something particularly difficult about bombing when you think your material is great and you can’t in the moment figure out what’s going wrong. Beneath the nervous giggles and smiles, you could sense the panic surging through Naomi once it became clear this was not going well. The sight of her angelic, white, Prince-inspired runway nearly sent me to heaven to meet the Purple One myself. I died. I lived. It was a series best. Naomi is the only competitor we haven’t seen lip sync this season, so there is a chance she could come into the finale Sasha Velour style and blow us all away.

6. I guess this is just the part of any season with Valentina where we realize that this is just all we’re going to get. She’s beautiful, she’s fashion, she’s strange, she’s unintentionally hilarious, but we’ve seen all she has. She’s a unique little gem of a queen, but there’s only so much there. It’s not quite that she didn’t understand this week’s assignment, but, honestly, I’m not sure she understands funerals, roasts, public speaking or interacting with human beings. It was so far off the mark that it almost circled fully back to being extremely entertaining. On the runway, she always delivers, but sometimes I worry she confuses “expensive” with “exciting.”