You are here: Home / Archives for Alex Mecum

Election day is this Tuesday, November 6, and there couldn't be a more urgent message than this right now. Let's flip the House. Gay adult … END_OF_DOCUMENT_TOKEN_TO_BE_REPLACED 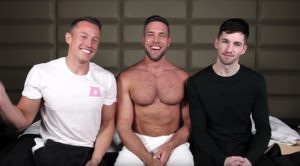 Davey Wavey sat down with Men.com performers Alex Mecum and Thyle Knoxx to talk about their experiences in the adult film industry and what they've … END_OF_DOCUMENT_TOKEN_TO_BE_REPLACED