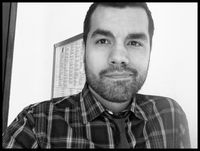 Norman Brannon is a musician and writer with almost 20 years of experience in music and journalism. Following the success of Anti-Matter — an independent music magazine he founded in 1993 — Brannon went on to become a contributing writer for Alternative Press, VIBE, Soma, and the groundbreaking irreverent hip-hop upstart Ego Trip. As a member of Texas is the Reason and New End Original, he steered a successful recording career throughout much of the '90s, achieving international acclaim and seeing his work licensed for use by Mercedes-Benz, Coca-Cola, and Activision, among others. Most recently, he served as a founding contributor for the launch of MySpace's Music initiative and cut his teeth in television as the host of Here! Network's The Deal. In 2008, Brannon issued his first book, The Anti-Matter Anthology: A 1990s Post-Punk & Hardcore Reader.