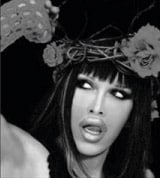 The Pet Shop Boys have participated in some wildly successful collaborations with singers like Dusty Springfield and Liza Minnelli. Their new collaboration with androgynous and visually flamboyant Dead or Alive frontman Pete Burns, “Jack and Jill Party“, should rank as one of their best ever. Burns’ instantly recognizable voice combines the mechanical precision of a welded factory part with the dark snarl of Billy Idol and is familiar to most from Dead or Alive’s ’84 smash “You Spin Me Round”. The PSB arrangement is “retro-electro”, harking back to the early 80’s twisted dark synthetic disco sounds

Best of all, the lyrics to the single are brash, defiant, and laced with the kind of dark energy only Burns can deliver. The conceit of the song is that Burns is going to a “Jack and Jill Party”, a slang term from the late 80’s which describes a masturbatory sexual get-together in which both gay men and lesbians are invited to participate. Other definitions include both gay and straight men and women but in either case a Jack and Jill Party is about exhibitionism and performing sexual acts in the presence of others.

Sexual honesty, openness, and rebellion seem to be the core messages of the song, conveyed in a driving series of verses, including this visual of two men walking hand in hand in order to shock the public:

Aside from the lyrics, the single has an amazing mood and energy. I was turned on to it by a reader of this site, so thanks.. Two electronic music legends on one song — doesn’t happen too often.